Merry Christmas Eve… as a special treat today we have an extra review from Kaye George separate from her Monday posts. Enjoy!

Fighting Chance by B. K. Stevens

This is what you’ve been looking for! If you’re looking for a book for teen boys, you know they’re scarce. This one has enough excitement, twists, and turns to keep them up way too late on a school night, avidly reading. 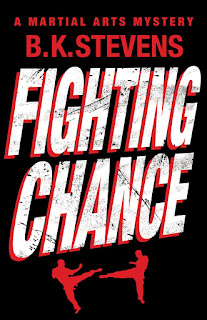 Not only is it about an appealing group of four, sometimes five kids, who don’t always get along, it’s also about the nice and not-so-nice teachers they share, and about family relationships that are not always ideal. But it’s also about martial arts.

Their coach is facing an opponent as the book opens, but the main character, Matt, thinks something is a bit off about this other guy. His name is Bobby Davis and he’s come from a dojo in Richmond to Ridgecrest for the competition. He neither looks like a fighter nor acts like one, until the moment he crushes Coach Colson’s larynx with a spinning hook kick. Was it intentional or an accident? Most people say the latter. Matt knows they’re wrong.

When he and his friends try to dig deeper and find out who Bobby Davis is and why he wanted to kill the coach, trouble starts happening all around them. They seem to be antagonizing some dangerous people. Matt and his friends, including the intriguing Graciana, join a krav maga class as result of some of their investigating. That’s a good thing, because they’ll need their wits about them and all the martial arts training they have to get through this.