Monday With Kaye: "The Fallen Angel" by David Hewson (Reviewed by Kaye George)

Kaye George’s review today is on the 9th book of a series that began with A SEASON FOR THE DEAD. From reading the below review as well as poking around at Amazon it sounds like one heck of a series.

The Fallen Angel by David Hewson

This ninth Nic Costa book follows closely on the heels of City of Fear. Nic's present adventure takes the reader deep into Rome, not only into the complex family life of the man, Gabriel, who has 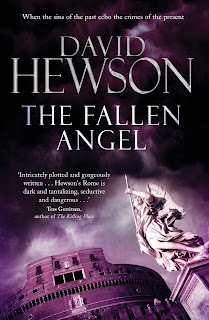 apparently plunged to his death from a faulty scaffold, but deep into the ancient Cenci family and the mythology that surrounds that fateful clan.

Three days into his August holiday, Nic comes upon a young English girl, Mina Gabriel, bending over her father’s dead form. The similarities to Beatrice Cenci, a tragic Roman figure, are striking. As are the parallels between the Gabriel family and the Cenci family. To begin with, the death happened on Via Beatrice Cenci, where the family has been staying. Something about the accident, about the way Mina looks at him and about the way her brother disappears after an enigmatic statement, ‘She's safe now,’ compels Nic to investigate, even thought it’s August and, as everyone reminds him, he’s on holiday.

So is almost everyone else at the Questura, the police department where Nic works. This makes investigation a little more difficult. The fact that the other police don’t at first think the death is suspicious gives Nic more problems. Why was Mr. Gabriel, an intelligent, popular, respected academic, reduced to living in this dilapidated building in the ghetto? Is the answer in the family’s tangled history or in further links to the Cenci history? Mina and her mother are obviously holding something back, but nothing will make them reveal what it is.

An ancient organization, The Brotherhood of the Owls, with links to Galileo, may hold some clues. But then, again, it may just add to the confusion.

Meanwhile, an attraction to Agata Graziano—a beautiful woman who has given up the vocation of nun—is tugging at Nic. Will the memory of his deceased wife let him pursue whatever might become of a relationship with her?

It was great fun to delve into Roman history and a modern mystery with Nic Costa.

Reviewed by Kaye George, Author of  Choke, for Suspense Magazine