Monday with Kaye brings news of another book and author I have not read. Between FFB and Kaye’s work here one could build one heck of a reading list. Make sure to treat yourself to a book or two during this holiday season.

William Monk has a new job, head of the Thames River Police. His battle is not a new one, however. He failed to convict child-trafficker Jericho Phillips in the past and the abuse Phillips facilitated continues, funded by someone still unknown. The child Monk and Hester rescued from the clutches of that evil, Scuff, is settling 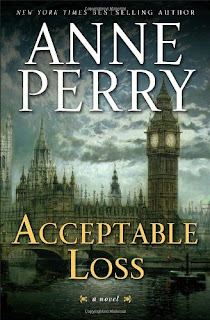 in, although they still hear him crying in the night. Scuff says he’s eleven, but looks about nine. If Monk can’t stop the most recent manifestation of abuse, he will feel he’s failed the boy.

It seems to me that the Victorian England of this book was a time when morals were more sharply defined, more black and white, than they are now. The horror of an underground industry, one that panders to the perverted, juts starkly through Perry’s lush prose. Some of the situations are quite vivid, just to warn you.

A squalid little man, Mickey Parfitt, is found dead at the edge of the river. He’s been bashed on the head, then strangled with a distinctive silk scarf. His unsavory companions, ‘Orry (short for ‘Orrible or Horrible) Jones, Tosh, and Crumble are questioned first, obvious initial suspects. But the scarf belongs to an aristocrat wastrel who is a benefactor of Hester’s clinic for rescued women of the street. The abuse, and pornographic live shows involving very young boys, is taking place on a boat, so the murder and the trade are all within Monk’s jurisdiction.

No one is very interested in finding Parfitt’s killer, since the world is better without him, but Monk is determined to find out who is supplying the money. If he doesn’t, nothing will stop. The upper class seems united against Monk investigating and solving this crime. Depending on who murdered Parfitt, funding could be cut off for Hester’s clinic and Monk could lose his job. Especially if Monk goes after the wrong person.


Reviewed by Kaye George, Author of Choke for Suspense Magazine

Have wandered away from Anne Perry's series over the last year or so. This is an impetus to return. Thanks!

I never have read any of hers.

Thanks for coming by and commenting, Larry.

Love her Monk series. Best to start at the beginning when Monk is suffering from amnesia after an accident and he and Hester have just met.