Review: "The Crossing: A Bosch Novel" by Michael Connelly

It has been approximately a year since the events of The Burning Room and these days find Bosch retired, suing the LAPD over the retirement and other issues, and spending his time working on restoring his vintage motorcycle. He should be spending his days working homicide cases. 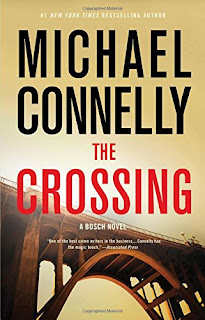 That is exactly what his half-brother Mickey Haller wants him doing. Part of that is by helping Bosch with his lawsuit against the department. Another part of that would be convincing Bosch to work for him as an investigator. Mickey Haller, known to one and all as “The Lincoln Lawyer,” has no idea how strongly Bosch feels about such a move. To do that, to slip over and work for the defense (the dark side), would betray everything Bosch has ever stood for as a detective with his three decades plus with the LAPD.            .

Haller’s client is a man by the name of Da’Quan Foster.  A reformed man, Foster is sitting in jail on a murder charge and Haller is sure he did not do it. Haller is positive that his client is a pillar of the community these days and is willing to deal with the consequences if Bosch proves otherwise. All he wants right now is for Bosch to look over the case and offer an opinion. The problem for Bosch, more than being asked to crossover and work for the defense to help set a man free, is that if Foster is innocent the wrong man is in custody.  The idea that a killer might be out there walking free is a small possibility and the only reason Bosch takes a look. It does not take him long to determine that there are questions and inconsistencies in the prosecution case and, at the very least, some sloppy police investigative work.

The Crossing: A Bosch Novel is another solidly good book from author Michael Connelly who has been doing this a long time. Part police procedural and part mystery, the read moves rapidly as Bosch, working without the legitimacy of the police department, has to finagle and nuance his way through an increasingly complex case. A case that ultimately leads to one of the best climatic endings in this series to date.

While events earlier the series are briefly referenced one could read this first if you are new to the series. If you are, why have you waited so long?

Material supplied by the good folks of the Plano Public Library System who may or may not have known I would review the book after reading it. They just want the book back intact.

I've kept up with both of these characters.
they are always interesting and enjoyable.

That they are. Thank you for reading AND commenting.