Known for their very good bimonthly magazine of crime fiction (often very dark and twisted), the Thuglit folks put together their first themed holiday collection. Thuglit Presents Cruel Yule is an anthology of 11 twisted stories set during the holiday season. If you are have ever considered the idea that Santa Claus was a peeping tom pervert who stalked people long before the NSA decided to track everyone, this is the book for you.

After a very brief introduction from Editor Todd Robinson it is on to the stories. “The Santa Con” by Rob Hart gets things going by way of having some Santas in full costume rob a bank. The robbery has been timed to coincide with SantaCon in New York City where hundreds of folks show up dressed like Saint Nick. A perfect plan destined to fail because this is a Thuglit production. The real question is how spectacularly wrong will it go? 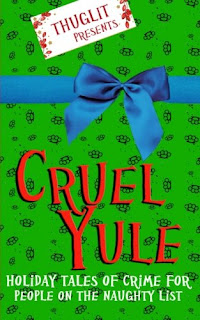 Sometimes one can get nitrous oxide outside of going to the dentist and needing a procedure. If you were lucky and at a certain concert out west--- usually some sort of hippie jam or electronic dance festival---- you might have come across a certain van. Led by a normal seeming guy by the name of Chris who was clearly psycho the more time you spent around him he had connections that would get the nitrous. The group would sell the balloon hits that would give you a buzz. In “Christmas Morning Coming Down” by Jordan Harper things were okay until Jimmy got stabbed and everything went wrong out in the desert that Christmas.

Sexual harassment is the backdrop to “Mistletoe” by Hilary Davidson. The holiday party is just an excuse for Ian Wainwright to go after Sadie. She knew almost from her first day of work what kind of guy he was and had managed to avoid things until now. With few options and no help by way of HR Sadie is a millennial that will have to learn a new life skill.

A child of divorce learns mad skills. Some of those skills in negotiation can make one a very good arbitrator. Such a job can be lucrative as noted early on in “Letters to Santa” by Thomas Puck. There are also consequences in a story that has a touch of the Halloween season in it.

It is Christmas day in 1837 as “Okeechobee” by Ed Kurtz begins. In a swamp of the same name, the 4th infantry regiment of a 1000 men has come to quell the Creek and Seminole. While most of the men have the killing of Indians on their mind, a soldier by the name of Parker Getts has a more personal target in mind. Finally, after eleven long years, Parker Getts is going to get payback. His annual Christmas Day prayer has apparently finally been answered.

Discovered by Johnny Shaw, “Feliz Navidead” by Brace Godfrey tells the tale of the world’s deadliest Mexican. He is also the world’s greatest Mexican lover and a few other things. His name is Chingón and men who go up against him die the most gruesome deaths.  He loves grenades. Women love him and can’t keep their hands off of him. A former member of an elite team known as the Explosioners that had battled and defeated numerous foes including Dr. Pervert’s mutant army of sex ogres, Chingón has determined that it is time to go to Milwaukee, Wisconsin to see the old gang again. Unfortunately, or maybe fortunately for Chingón, sex and death are on the menu at the reunion.

The usual poker game is in play as “The Brass Coin” by Justin Porter begins. Dre, a writer, is having a hard time of things. His money situation is not helpful to the goal of buying a nice present for his son. Desperate times call for desperate measures including giving up a very special coin.

When a bodyguard by the name of “Krampus” is driving somebody by the name of “Krissy Kringle” around in her Geo Tracker as a story starts, you know things are going to be weird. In “A Very Blacky Christmas” by Angel Luis Colón, Krissy wants a guy named Black Jaguar dead. Christmas, Florida is her small town and Blacky must die. The problem is he is crazier than she is. The town is going to be a war zone when everything is said, burned, fried, blown up, dead, and done.

For the children of Joseph Ketler a hard life is made worse by an abusive father. Kids playing around just before dinner has consequences in “Fork” by Jan Conley. For some of us, this very well done story brings back some hard memories.

No one will hear Roger Cobb sing “O Holy Night” on Christmas morning in “Unholy Night” by Terrence McCauley. There is no one for miles around the abandoned resort deep in the jungle. That also means nobody is around to hear his prisoner scream. It is time for negations to begin.

The cellar was supposed to have a band for Christmas Eve. But, there is no music and the man known to all as “Boo” is not a happy man. He is less happy when Caleb shows up with a lady Boo vaguely knows. Her name is Darla and she should have way better taste in men. Things are about to get messy in “’Twas The Night Before….” by editor and contributor Todd Robinson.

The 11 tales included in Thuglit Presents Cruel Yule are all dark ones that have virtually nothing in common with the idea of goodwill to all men. Instead, bad will to all is often the theme though there are occasional moments of humor. Dark and twisted as one would expect from Thuglit with some mighty good noir style holiday tales.

Hopefully, this is not the last of the themed holiday collections. After all, Valentine’s Day is coming up which is good for a massacre or two. Then after that somebody has to slaughter all those rabbits for Easter. Not to mention the fact that the Fourth of July demands somebody to take an explosive firework up the rear. Heck of a way to rob a bank. There is a lot of dark potential in holidays for Thuglit to mine.