Monday With Kaye: "Dead of Wynter" by Spencer Seidel (Reviewed by Kaye George)

Today was to be the final Kaye George  column, but we have had a major miracle. Kaye found another batch of reviews which means we will face the first weeks of 2016 with Kaye George by our side. Now, where can I find Tiffany....

Dead of Wynter by Spencer Seidel

A riveting beginning set the tone as Chris Wynter races to elude a ghost from twenty-five years ago. His twin sister, Alice Dunn, has managed to escape her dismal origins in Redding, Maine, but the mysterious death of the father she's never loved draws her back to Maine from her upscale life in 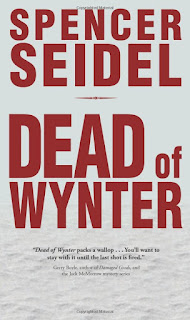 All is not rosy for Alice, even before her trip, however. Her husband, Gerald, growing more and more distant, has recently introduced Alice to Tiffany, his purported administrative assistant. Tiffany is in her late 20s, with big, perky boobs, a white smile, and long legs. The works, is what Alice thinks, with bitterness.

Alice's mother wakes her up with a call to tell her that her father has died. When Alice asks if Chris can stay with her mother until Alice arrives, her mother tells her that Chris's drinking has gotten worse. But, as Alice discovers when she gets there, Chris is completely missing--and suspected of killing his father.

The past begins to haunt Alice, beginning with thoughts of Ray, whom she and Chris knew as a teenager. In fact, she thinks she sees his ghost. She also seems to sense that her twin brother isn't dead. But she doesn't know whether or not he killed the father they both despised. Over the years, Chris has become more and more like Papa Wynter, their father, a mean drunk. Alice thinks maybe she should have kept in closer touch over the years, maybe she could have saved her brother.

The old flame she runs across adds an unwanted wrinkle to her feelings about her marriage. More and more of the past unravels and it becomes apparent that what has happened to Papa has roots in the dark, evil past, a past Alice would rather forget.

This is a haunting mystery told in lyrical style with unforgettable characters.


Reviewed by Kaye George, Author of Choke, for Suspense Magazine