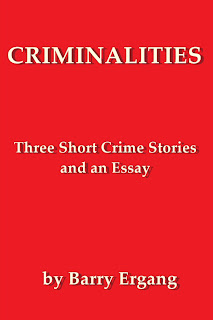 The first story is”Jewel of Denial,” a gem originally published in the June 2005 issue of Mysterical-e.  Lainie Truscott is dismayed when guests at her bed and breakfast are robbed of cash and jewelry during the night. Lainie follows a hunch and takes a short trip to see if she's right. When she arrives at her destination, one surprising twist after another will leave you grinning, nodding your head, and thinking, “Well done, Mr. Ergang.”

Next up is “Vigilante,” which received a Derringer Award in 2007 for Best Story of the Year. Weissman is alone in a dark alley with a militant, tattooed skinhead. Their vast difference of opinion about the Holocaust is settled in the only appropriate manner.

The third story, “Brianna’s Way,” was an Editor’s Choice when it appeared in Flash Bang Mysteries Magazine. When his ex-wife's lawyer wants to talk to him, Rutledge agrees to the meeting out of curiosity. Brianna is accused of killing her second husband, the man she dumped him for. What does the woman who ruined his life want from him?

In the essay “Impossible Pleasures,” Mr. Ergang tells how in his youth, he became an “unregenerate, unapologetic fan of the mystery genre,” and discusses classic writers and stories. He was drawn in particular to the “locked door” or impossible crime” tales. These are the stories in which a crime is committed in a space such as a locked room with no way for the criminal to get in or out without being seen. If you're a fan of this type of story, you'll learn which authors, past and present, to look for.

Texas author Earl Staggs earned all Five Star reviews for his novels MEMORY OF A MURDER and JUSTIFIED ACTION and has twice received a Derringer Award for Best Short Story of the Year.  He served as Managing Editor of Futures Mystery Magazine, as President of the Short Mystery Fiction Society, and is a frequent speaker at conferences and seminars.
He invites any comments via email at earlstaggs@sbcglobal.net

He also invites you to visit his blog site at http://earlwstaggs.wordpress.com to learn more about his novels and stories.
Posted by Kevin R. Tipple at 12:30 AM

Thank you, Earl. I appreciate your taking the time to read and review it, and of course I'm glad you like it.

Like Kevin with his collection Mind Slices, I'm participating in Smashwords' annual "July Summer/Winter Sale," so "The Play of Light and Shadow" is available there at a reduced price through July 31st--as is Mind Slices.

Impressive with the awards and all. Three short stories together would be a lot easier to read than the usual book-length short story collection. I'll look into to this. I'm way behind on my reading, so less in length that is still good reading is a selling point for me.

Maybe it's the immediate gratification climate which started with the remote control, or maybe it's because I'm a senior, but I do find shorter stories more appealing these days. Three short stories are easier to read and stay focused, than one long one, and these sound promising.

Earl, you always do a great job with your reviews!!


Linda, I'm with you on the value of well-written short stories. They're easier to fit into a busy life schedule. I also like them for the variety they bring to my reading time.


Morgan, I promise you won't be disappointed with these three stories from Barry. Each one is excellent.


Sylvia, that kind of compliment will probably go to my head. Thanks for saying it, you sweet talking thing, you.