Crime Syndicate Magazine: Issue 1 certainly delivers on their idea of “A Magazine Of Crime Fiction.” From the distinctive cover to the eight short tales selected by Guest Editor Eric Beetner and Founder/Editior-In-Chief Michael Pool the first issue delivers in all aspects. As these are short stories and therefore it is not possible to say much without creating spoilers, the barebones descriptions below will have to suffice. 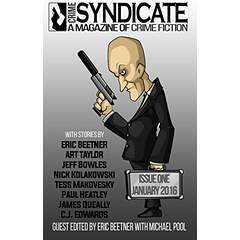 After a brief introduction from Michael Pool, the issue opens with “So Close” by Eric Beetner. He knew his wife, Shelly, was having an affair with a neighbor named Robert. Their affair has been going on for awhile now so he isn’t surprised to find them together at the house. He just never thought he would find them like this.

Suppose a family member died because of a crime. Wouldn’t it be nice to have a fully loaded clone ready to resume life and relationships if the worst happened? Reporters and other folks call the idea “victim replacement.” Those who work in sales prefer to call it “Restoration” in the tale of the same name by Art Taylor. No matter what you call it, sometimes customers have to have an additional incentive to make the sale.

One of the drawbacks of social media is that you can find out what others think about you. There are even a website that serves as the “premier consumer review site for mafia thugs, hitman, and muscle. Based in Hoboken, New Jersey the man known as Jackson “Jack the Hammer” Palmer isn’t getting good reviews. For Jack, an online diary helps him vent in “Jack The Hammer’s Online Identity Crisis” by Jeff Bowles.

Marco is always a bit of a jerk when the cards are going his way. For Darius they often don’t and the Berretta next to him isn’t helping with that. The poker game just the latest clash between the two in “On Tilt” by James Queally.

Danny needs a miracle in the form of 10k by next Tuesday or some very bad men are going to come to his airstream camper and do some very bad things to him. Tyler “The Plumber” Anderson is the bookie who most definitely wants his money in “Dee The Friendly Grizzly’s Little Miracle” by Nick Kolakowski.

Zeke is out and now Don and Jackson need to get to work in “God May Forgive You” by Paul Heatley. A score needs to be settled.

The familiar theme of being cheated on is just one small piece of “Tuning The Old Joanna” by Tess Makovesky. Roy just needs to prove it by catching her in the act. To do that is going to require surveillance and that will not be easy.

Trooper Alvin Mags is working undercover in “The Line” by C. J. Edwards. The job is dangerous and that was before things got seriously complicated.

The first issue ends with an interesting interview with Eric Beetner. He talks about writing, upcoming projects, and quite a lot more.

Crime Syndicate Magazine: Issue 1 was a mighty good read. The eight short stories selected are far more complicated than their brief spoiler free explanations above. These are reads of depth that will surprise experienced mystery readers. Notably very funny with “Jack The Hammer’s Online Identity Crisis,” each short tale has quite a lot going on. Simply put, there is not a bad one in the bunch. Crime Syndicate Magazine: Issue 1 is a real treat for mystery and crime fiction readers.

I first heard about this in early May after Michael Bracken announced he had a story in the second issue. About that same time, in anticipation of their second issue, those in charge put this first issue temporarily free at Amazon. So, I picked up a copy. I used my funds in my Amazon Associate account to pick up issue two and that very good issue will be reviewed soon. As will the final and very good issue of Thuglit and a few other things. Spending a lot of time each day at the hospital this past month while Sandi got her radiation treatments has meant a lot of stuff has been read so I am way behind on reviews.

Thanks for the review here, Kevin--and best wishes always to you and Sandi. Keeping you in our thoughts.
Art

I read this issue a while ago and I've got to say that you are really good at writing story descriptions without giving away the fun of the story or ending. Kudos!

I bought this excellent first issue when it first came out. I was delighted and impressed by the top quality writing. I'm looking forward to buying the second issue and to more excellent work from this new, welcome crime periodical.
Lida Bushloper

Thank you one and all. Much appreciated.