The unconventional title of Mage, Maze, Demon as well as the subtitle “A Barbarian Sent On A Mission Of No Return” pretty much tells it all. The barbarian goes by the name “Bryle” and is a warrior fleeing for his life as the read begins. A wildfire is chasing him and every other living creature in the forest. The fire is right 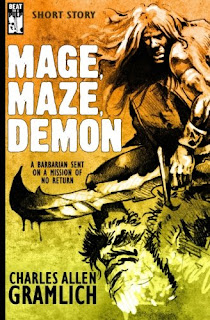 behind him as he flees into a cave. A previously unseen doorway swings closed behind him protecting him from the fire.

That also means that his way out is now closed. He is forced to find another way out of the cave and begins to explore. That exploration leads him downward into the mountain and to an incredible cavern. A cavern populated by one person--- a sorcerer. A sorcerer that wants his help and will grant Bryle his freedom if he accomplishes his task. Much is to be done if Bryle is going to successful in Mage, Maze, Demon by Charles Allen Gramlich.

Beyond the obvious maze and a demon involving a mage (sorcerer) of the tile, much is going on in this short fantasy tale by Charles Allen Gramlich. Bryle is a complicated character as it the tale itself with plenty of detail. Billed as the third entry in the Veridacal Dreams series inspired by the dream journals of Kyle J. Knapp, Mage, Maze, Demon follows the anthology The Lizard’s Ardent Uniform and Other Stories as the fantasy novella Treasure of Ice and Fire. Charles Allen Gramlich quickly pulls the reader into his tale firmly grounded in the sword and sorcery fare while throwing in a mystery element or two. The extensive details are what make this tale come alive for the reader. One hopes there will soon by another outing for Bryle.

The Amazon Overlords state I picked this up on March 19, 2016. They do not tell me whether my “purchase” came by way of a free read or using funds in my Amazon Associate account. They still do not know everything and I do not either.