Monday With Kaye: Most Wanted by Lisa Scottoline (Reviewed by Kaye George)

This week it is thriller time with Kaye….

Most Wanted by Lisa Scottoline

As this domestic thriller opens, Christine Nilsson is leaving her job as a reading specialist at Nutmeg Hill grade school and her fellow teachers and faculty members are throwing her a shower. She’s leaving because she is finally pregnant, and rejoices in the fact. Only her best friend and her parents know the truth about the baby, that she and her husband Marcus used a sperm donor because of his low count. This was a difficult 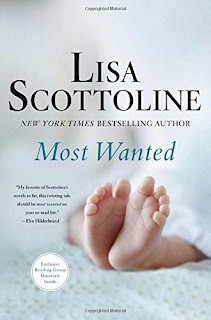 decision, but they’re both happy with the way it’s turning out.

They’ve seen pictures of their donor, known only by a number, Donor 3319, and he’s a handsome, intelligent-looking blonde guy, a medical student, who resembles Marcus. As Christine is helping to clean up after the party, she spots a report on TV of a serial killer, a man who has brutally slain several nurses. The man has been caught and he’s shown being put into a police car. He looks straight into the camera. His name is Zachary Jeffcoat, aka the Nurse Murderer, but Christine realizes he’s also Donor 3319.

Marcus isn’t as convinced as his wife is, at first, and the best friend refuses to believe it. But Christine has to know for sure. She can no longer tell if her nausea is morning sickness or is from knowing that the child she carries, that she loves, is most probably fathered by a murderer. Eventually, this innocent unborn child wreaks havoc between her and Marcus and causes her to defy the orders of her husband and their lawyer, putting herself into a dangerous situation, trying to discover the truth and save her marriage—and her child.

What would you do if you were carrying the baby of a serial killer? This is a gut-wrenching, heart-pounding story.

Reviewed by Kaye George, Author of Death in the Time of Ice, for Suspense Magazine

This was such a fresh, well-done plot, I could probably read it again.