The ghost of his father continues to haunt him in the latest in the Game Warden Mike Bowditch series, Widowmaker. So too does a training film he saw on his first day as a cadet of the Maine Criminal Justice Academy. That message five years ago stuck in his mind and regularly appears in his nightmares. 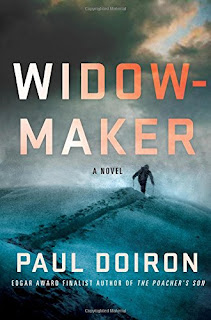 He had just been thinking about the film and the message delivered by the instructor when a strange vehicle appeared at the road down by the end of his drive minutes after he had gotten home on this January evening. That vehicle is a concern and he puts his gun belt back on to deal with the situation. What had been planned as a quiet evening at home by himself as his wildlife biologist girlfriend, Stacy, is out of town, is now on the backburner due to the red Grand Cherokee parked with somebody inside smoking. The driver turns out to be a 48 year old woman named Amber Langstrom.

First, she says she pulled over on the narrow road to make a call. Then she says she needs to use a restroom. Finally, she says she was sitting at the drive trying to work up the courage to come talk to Mike about his father, Jack Bowditch. The man is dead and buried, but his criminal actions in Maine are legendary and that legacy has been a heavy burned on Mike Bowditch. After coming up to the house, Amber Langstrom drops a bombshell on Mike.

She claims that she had a relationship with Jack Bowditch many years ago. It was a sexual relationship. If she is to be believed, this happened right before Mike’s world turned upside down, as his parents divorced and he moved away with his Mom. Amber Langstrom goes on to allege that her son, Adam, is Jack’s son making him Mike’s half-brother. Adam is missing and she believes Mike should look for him. Adam was recently released from prison after serving two years time for a conviction for having a sexual relationship with a minor. He was 17, she was 14, and they were in love until her parents found out. Adam’s life was forever changed and Mom is very angry as to what happened. Classified and registered as a sex offender, Adam has been out for three months and been following all the rules according to his mom. He has been working and living at a logging camp that serves as a halfway house for registered sex offenders with nowhere else to go. She is desperate for Mike’s help to find her missing son.

After some preliminary checking by phone and a lot of thought, Bowditch eventually makes the journey to the Widowmaker Ski Resort to start looking for Adam. The woods surrounding the resort may be lovely, dark, and deep, but they also hide many secrets. Secrets of a variety with lots of players determined to settle scores and keep things hidden in the snows of Maine.

Widowmmaker is the latest in the series that began with the Edgar award nominated The Poacher’s Son. Six books later, the central character Mike Bowditch continues to evolve and change as he gains wisdom and maturity. The mysteries and complexities of daily life, person al relationships, and other issues continue to be a background staple in this long running and very good mystery series.

Material supplied for me to read and review by the good folks of the Plano Public Library System.