As I did in my review of Short Stories of Earl Staggs, I have to mention up front that Earl and I are old friends and editorial colleagues. That said, and based on some of the short stories of his I read before I ever got to know him, I thought he was an excellent storyteller. 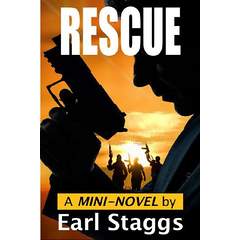 "Rescue" underscores my contention. A novelette-length adventure, it stars Tallmadge "Tall" Chambers, who was introduced in the superb thriller Justified Action, and who has become the head of a secret nameless agency that puts terrorist groups out of business: “When a terrorist group was determined to have definite plans to strike and harm innocent people, the agency stepped in and stopped them by whatever actions were necessary. That included insurgent groups on American soil, homegrown and foreign, who thought the American way needed to be changed by violent methods.”

After preventing a busload of terrorists from killing attendees of a street festival in Abu Dhabi, Chambers and his crew, one member of which is on loan from the Air Force and utterly inexperienced in this sort of operation, are assigned by the President to effect a rescue of hostages from a location "in a rural area north of Dubai" so exposed on all sides that mounting a sneak attack is impossible.

To say any more would be to spoil a rapid-fire tale which deals with the kinds of regrettable real-life episodes we hear about in the news all too frequently at the time of this writing. It’s not likely that action and adventure fans will be disappointed by “Rescue”—with the possible exception of those offended by a few instances of the kind of street language which isn’t out of place in a story of this kind. (Relax! No f-bombs in a carload.)

Interested readers can find “Rescue” in multiple formats at Smashwords, and in the Kindle edition at Amazon.

Some of Derringer Award-winner Barry Ergang’s work can be found at Amazon and Smashwords. The latter site has it on sale through the end of July.

I keep hearing his name. May be mostly from you, Kevin. I didn't know he wrote short stories and also novels, but his name seems to be all over right now.