FFB Review: A CHAIN OF EVIDENCE (1912) by Carolyn Wells (Reviewed by Barry Ergang)

Barry is back for Friday’s Forgotten Books hosted by Patti Abbott. Read Barry’s review and then check out the FFB list today.

Attorney Otis Landon and his widowed sister, Mrs. Laura Mulford, live together in the Hammersleigh, “one of the most attractive of the moderate-priced apartment houses in New York City.” At thirty-two, Otis expects never to marry, although, as he tells his sister, “I rather fancy that if I ever fall in love, it will be at first sight, and very desperately.” 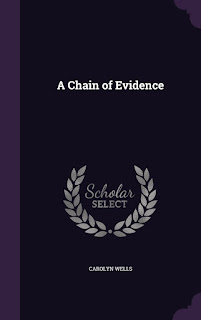 Conveniently both for Otis and the plot, he does. The object of his affection is one Janet Pembroke, who lives in an apartment across the hall with her wealthy but miserly, temperamental, and somewhat reclusive great-uncle, Robert Pembroke. Although they’ve only lived in the Hammersleigh for two weeks, Otis and his sister have both heard Pembroke’s “voice raised in tones of vituperation and abuse.”

Not long after, Robert Pembroke is found dead. Otis and Laura Mulford are drawn into what turns out to be a case of murder, Pembroke slain by what is described as a woman’s method. When the crime was committed, the door to the apartment was locked, the windows were fastened tight, and a night-chain was in place, which suggests that only one or both of two others within it, Janet Pembroke and her maid, Charlotte, could have done the deed. Fully smitten, Otis is ready to do whatever it takes to protect the woman he (irrationally?) loves.

Thus begins the essence of a mystery novel by an author seminal to the genre who predates “the Golden Age.” It is a novel that demands of modern readers patience, tolerance and, above all, a sense of humor.

Patience is essential for several reasons. The author’s narrative style is that of an older, more formal era, and will likely seem stilted and verbose to a modern audience. The dialogue is equally stilted. I sincerely doubt Americans in the early 20th Century spoke the way Carolyn Wells’ middle- and upper-class characters do. Jane Austen’s English characters from the early 19th Century spoke less “literarily.” For example, consider this exchange between Laura Mulford and Otis Landon regarding whether Janet Pembroke merits her uncle’s berating:— 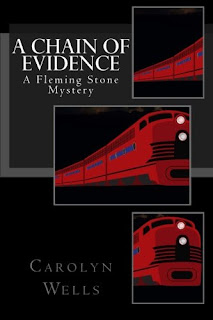 “Yes, but how do I know what she may do to deserve it? Those dark eyes show a smouldering fire that seems to me quite capable of breaking into flame. I rather fancy Miss Pembroke can hold her own against any verbal onslaught of her
uncle.”
“Then I’m glad she can,” I declared; “as she has to stand such unjust tyranny, I hope she has sufficient self-assertion to resent it. I’d rather like to see that girl in a towering rage; she must look stunning!”

The book could be shorter by a third to a half if Otis Landon’s first-person narrative didn’t contain multiple repetitions of the facts of the case and, especially, incessant lengthy passages in which he moons about the enigmatic and volatile Janet Pembroke, his love for her, his anxieties about her possible love for other men in the story, and angst about her possible guilt.

Tolerance is essential because of snobbishly demeaning, disparaging and racist attitudes toward “menials”—e.g., an elevator operator whose language suggests a substandard education, and Charlotte, the African-American maid, with her stereotyped dialect. Here’s Charlotte talking about forgetting to remove the night-chain before opening the apartment door:—

“Laws!” exclaimed what was unmistakably a negro (sic) girl’s voice, “I nebber can ’member dat chain!”

A sense of humor is essential—make that vital—when reading this novel. Thoroughly non-existent is police procedure as we’ve come to know it nowadays. Landon and others are given license to explore and tramp all over the crime scene as they see fit. A prominent lawyer, very much a suspect, who represented Robert Pembroke and who visited him the day before his death, is presently out of town on business. Rather than locate and bring him in for immediate questioning, the police and D.A. decide to delay official proceedings until his return. Otis Landon fancies himself possessed of a detective’s instincts, and manages to find physical clues and talk to people connected to the victim who might have reasons for wanting him dead while the police do almost nothing investigative. But despite his efforts, he can’t resolve the locked-apartment puzzle, so he ultimately consults Carolyn Wells’ incarnation of the Great Detective, Fleming Stone. A Chain of Evidence contains twenty-four chapters. Fleming Stone doesn’t appear until the twenty-first (or, according to my Kindle, until eighty percent of the novel was behind me). As soon as Landon explains the circumstances of the case to Stone, the latter announces that he knows who the murderer is. In order to solve the locked-room problem, however, he must visit the apartment. Once he does, it takes him no time at all to figure out the answer to that riddle.

The fact that the solution is a complete cheat is apparently inconsequential to the author. Much earlier in the story the reader is given several crucial details concerning the impossibility of entrance to the apartment with the night-chain in place. What is revealed in Stone’s explanation contradicts much of it and points up something the reader should have been told but wasn’t, thus underscoring that the reader has been unfairly duped.

Except to mystery historians and purists, I must conclude that A Chain of Evidence is nothing more than a (vaguely) entertaining curio.

Derringer Award-winner Barry Ergang’s own (fairly-clued!) locked-room mystery novelette, “The Play of Light and Shadow,” is available at Amazon and, during the annual sale through the end of July, at Smashwords at a reduced price, among his other works you can find at those sites.
Posted by Kevin R. Tipple at 12:30 AM

I wanted to like this, but couldn't get into it enough to care about anyone in it. Your review is spot on.

Agreed, Richard. The characters are cardboard, and with the exception of the "menials" noted, they all sound (stiltedly) pretty much alike.

I noticed that one of the book covers Kevin unearthed features prominently a passenger train, one utterly sleek and modern and unlike anything known at the time this book was written. Moreover, trains are not major factors in the story, so why someone decided this cover was appropriate is beyond me. It definitely does not work symbolically, because this isn't a story anyone--reader or reviewer--could honestly describe as a high-speed train trip.

No, my Dad had model trains and there was at least one like this back at that time. Now, whether or not there is a train in the read I leave it to you two.