Monday With Kaye: "Down the Darkest Street" by Alex Segura (Reviewed by Kaye George)

Another Monday With Kaye, like air conditioning, is a very good thing…

Down the Darkest Street by Alex Segura

The torrid Miami atmosphere adds to the gritty beginning of this noir tale, the second Pete Fernandez mystery, as he moves from one darkness to the next. 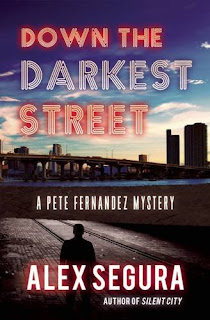 Pete is trying to be a recovering alcoholic. He lives in a quiet Miami suburb with, unfortunately, his ex-wife. That’s supposed to be temporary. He attends AA, but not regularly and not seriously, after the initial events. As the story opens, he’s getting beat up in an alley after consuming prodigious amounts of Jim Beam and beer. When his hand inadvertently strayed to the wrong soft thigh, it led to his take down. As he’s stumbling out of the alley, post-whipping, a van drives by. Pete gets a good look at the driver and at the teen-aged girl curled up beside him. That leads to trouble.

Having lost his job as a sports reporter, he helped a fellow journalist, Kathy Bentley, with a sensational story that brought about the exposure of a mob hitman. The monetary reward was enough to enable him to spend a lot of time thinking about drinking and to work a part-time job in a used bookstore. He doesn’t have many friends. One is Dave, the guy who runs the Book Bin. Another is his potential AA sponsor, Jack.

He needs both of them as he gets caught up in the search for a missing teen girl and draws close to a dangerous, demented killer, like a moth drawn to a flame.

This hardboiled story is written for a quick read, with a nice, taut style, which is good because once you get started, you’ll want to tear through it. I enjoyed it without reading the first one, Silent City, but it might be good to read these in order.

I agree that air conditioning is a very good thing. It's wonderful to be compared to that! Thanks, Kevin.

The real thanks goes to you for doing these.

This review took me into the story with having to live with an "ex" and fighting to recover from alcoholism. I can see getting hooked early on with this one. I wanted to hear more about its prequel, but that would be a separate review.

Thanks so much, Linda!