It is repeat time here today for FFB. The review below first appeared  back in June of 2008. This blog was in its infancy and a whopping 35 people saw it. That means that most likely the review is new to you and that would be a good thing. After you read my effort, make sure you head over to Todd Mason’s Sweet Freedom blog for the FFB list. 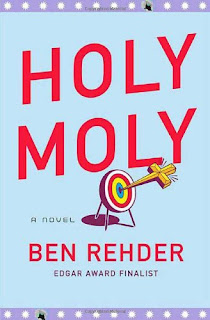 The death of backhoe operator Hollis Farley appears at first glance to be a tragic accident. Found underneath his overturned rig on land he was clearing to make way for a mega church near the Pedernales River, Hollis Farley died on the job. But, this is Blanco County where weird things happen and this one is another. Instead of being killed when the backhoe hit a boulder and flipped as first theorized, it turns out that he was shot in the back with an arrow capped with a broadhead hunting point.

As the case unfolds and Game Warden John Marlin's involvement increases, the facts and the people involved get stranger and stranger. Finding a dinosaur bone on the property of the planned mega church didn't get Hollis Farley killed. What he did afterwards just might have done the trick. With so many having a motive for doing the deed, it is up to John Marlin and Sheriff Bobby Garza to flush the real killer out before he or she strikes again.

Much like he did with Gun Shy Austin, Texas area writer Ben Rehder has penned another often funny novel that lets everyone in sight have it. This time his main target is the religious hypocrisy often found in the mega churches. It is tempting to speculate a bit as to which church served as inspiration but unnecessary. Considering past events across the country, this satiric novel could easily become too real in coming months as no doubt another religious leader of a mega church will be caught doing something very wrong. It is inevitable—much like news reports of Jesus sightings in recently washed windows and fried food products.

In the meantime what we have here is yet another often funny novel sent in Blanco County, Texas featuring a strange murder, a ton of offbeat characters, and the resulting twisted and often funny search for justice. The book is another tale of the weird, funny and often absurd that packs a punch to the mind and the gut. Beyond the continuing romance involving John Marlin there is no real character development to speak of regarding the returning characters. That romance is a minor factor in the book with most of the focus on the murder case and the cast of offbeat characters who are involved at various levels. The result is a good piece of work with plenty of comedy and mystery guaranteed to keep readers entertained to the very last page.