Friday means Friday’s Forgotten Books. Barry Ergang is back this week with a new review as he reviews Drum Beat-Marianne. Stephen Marlowe is a favorite for Barry as his debut for FFB here back in March of 2011 was his review of Killers Are My Meat by Stephen Marlowe which ran again last year. In the years since Barry has reviewed Drum Beat- Dominique, Drum Beat-Madrid, Terror Is My Trade as well as Double In Trouble  by Stephen Marlowe and Richard S. Prather. Make sure to head over to Todd Mason’s Sweet Freedom blog for the rest of the FFB suggestions for today and lots of other good stuff.

Private investigator Chester Drum works out of both Washington, D.C. and—because his cases often take him abroad—Geneva, Switzerland. When this particular adventure opens, he’s in New York on a Friday for the funeral of his friend Axel Spade, who was notorious for his black market and other shady activities, and a wanted man in a number of countries because of them. Shortly after the ceremonies end, Drum is told by Spade’s New York lawyer that Spade has left a letter for him, and that he can pick up it on Monday morning. The idea is enormously appealing to Drum because it means he can spend time over the weekend with Marianne Baker. 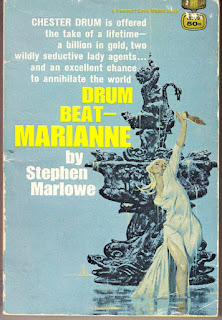 Marianne is a feature writer for View magazine, the widow of Wally Baker, who was Drum’s closest friend, and the mother of twin boys. Drum is their godfather. Two years or so after Wally’s violent death—a death for which Drum was the intended victim—“without either one of us quite realizing it, the sympathy I’d felt for Marianne turned into something else. We drifted into an affair that lasted a season or two, and if I was anybody but the sort of continent-hopping private eye who lives violently on borrowed time, it might have ended in marriage. I went away…but deep in the back of my mind there lurked the idea of Marianne and the possibility of going off into the sunset with her. I think I was always in love with her or ready to fall back in love with her, even if we didn’t see each other for as much as a year at a time.”

But during an otherwise pleasant evening on the town, Marianne tells Drum she’s not going to rekindle their romance because she won’t risk widowhood again with someone like him who leads a violent life. At shortly after 3 a.m. the following morning, a somewhat inebriated Drum receives a phone call from a man telling him to be ready to be picked up at his hotel or Marianne Baker will die. Drum cooperates, of course, and meets Colonel Katukov of the KGB, who insists that Axel Spade is not dead and that Drum must find him if he values Marianne Baker’s life. She’ll be taken by ship to Yugoslavia.

And so Drum is thrust into a situation involving murders, a billion dollars in Spanish gold, competing factions within the Kremlin, Yugoslavian secret police, a couple of attractive—and willing—women, and Ivo Jovanović, an eighty-year-old survivor of political imprisonment and the hope or bane of Yugoslavia, depending on a crucial decision he alone can make. Oh yes, there’s also the potential for nuclear war….

Drum Beat—Marianne takes off at a sprint and maintains a relatively steady pace throughout. Consistent with the author’s Chester Drum series is a strong sense of place, but not one too descriptive as to bog down narrative flow. Though hardly dealt with in great depth, a quality not expected or required in a short novel from this genre, characters are distinguishably well-rendered. All in all, another solid entry in a series that’s deservedly become a classic among fans of paperback original detective tales.

Some of Derringer Award-winner Barry Ergang’s work can be found at Smashwords and Amazon.