Barry is back this week for Friday’s Forgotten Books hosted by Patti Abbott. This week he reviews Drum Beat-Madrid by Stephen Marlowe. After you read the review and check out Barry’s work make sure you check out the complete list over at Patti’s blog. One could easily spend several lifetimes reading all the selections listed each week in the various genres…..

His primary office is in Washington, D.C., but private detective Chester Drum has also opened one in Geneva, Switzerland because his cases so frequently take him out of the United States. One of his most prominent clients, and a recurrent character in several books in this series, is Axel Spade. As Drum explains, “Axel Spade gives professional advice to black marketeers and smugglers. His going rates for an interview are a hundred bucks a half hour, and if you need the kind of advice Spade gives, a half hour of his time is the best investment you can make.” Spade has homes in New York City and Geneva, but must be careful about traveling elsewhere. He’s wanted in more than twenty countries.

When Drum Beat--Madrid opens, Spade and Drum are driving to Navarre, Spain, specifically to the ranch of Captain General Don Santiago Sotomayor, retired commander of the Guardia Civil. The purpose of the trip? Spade is going to marry Sotomayor’s niece, Luz Robles. Drum is to be his best man and, because he has a fair number of enemies, his bodyguard. 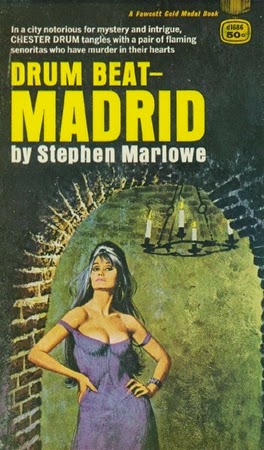 The Sotomayor family, the reader soon learns, is as dysfunctional as any outside of a Ross Macdonald novel. Don Santiago’s brother Hernando was a Loyalist during the Spanish Civil War. Don Santiago turned him in, and Hernando was executed. His son José was raised by Don Santiago. His wife and daughter went to Caracas, Venezuela. The wife died there, and Luz was raised by the Robles family. Son Ramón was adopted and raised in Baltimore, Maryland by Hernando’s closest friend. He’s now in the American Army, stationed in Spain, and calls himself Ray Moyers. He clearly has more than a platonic interest in his sister.

The schedule calls for José, who hasn’t seen his sister since they were children, to fly Luz from Madrid to Don Santiago’s ranch. When he lands and Luz is not with him, he explains: “We met in Madrid in the Ritz bar at noon. She had some shopping to do, she said. We were to meet later at the airport. I waited. She did not come. Still I waited. And then, at last, she sent a note saying she was afraid to fly with her señorito of a brother and had decided to take the train to Pamplona instead.”

A ransom note arrives at the ranch the next morning demanding fifty thousand dollars for Luz‘s return, leaving Drum and Spade to wonder why the ransom amount is so low, since Don Santiago can afford a great deal more. Drum spent two years with the FBI before going private, and has more experience handling kidnappings than the Guardia Civil. But Spade is initially unable to persuade Don Santiago to keep the two of them in the loop, let alone to permit Drum to investigate. It’s only after the kidnappers fail to appear at the designated ransom site they send Don Santiago to that the old man grudgingly agrees to let Drum take over. Take over he does, heading immediately to Madrid to try to retrace Luz’s steps and get a line on her current whereabouts--and those of her kidnappers. In doing so he encounters his share of colorful and well-delineated characters; surprises and revelations, not the least of which is the secret of the Sotomayor family treasure; some moral and ethical issues; and plenty of action, especially in Pamplona during the running of the bulls.

According to Marlowe’s obituaries in The New York Times and The Boston Globe, he was well-traveled and lived in France, Spain and Switzerland. To anyone who has read any of the Chester Drum novels, this will come as no surprise: Marlowe’s sense of place and its culture was always meticulously and vividly rendered. Drum Beat--Madrid is no exception.


©2014 by Barry Ergang
Derringer Award-winner Barry Ergang’s website is http://www.writetrack.yolasite.com/. You can find some of his written work at Amazon, Smashwords, and Scribd.