When your son gets his Bachelors Degree in Criminology at UTD and then goes on to work on his graduate degree in the same subject at the University, you learn a lot about the “Broken Windows Theory” which is a major part of Criminology. That theory ultimately led to the concept of “Community Policing.” That theory also led to the new book by award winning author Paul D. Marks. Please welcome Paul to the blog today with his guest post.

According to Malcolm Gladwell in The Tipping Point—How Little Things Can Make a Big Difference, Broken Windows theory says: 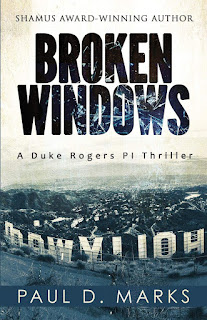 To that end, Private Eye Duke Rogers decides to help Marisol, an undocumented immigrant, whose brother has been murdered.

Duke says, “I believed in the ‘broken windows’ theory, which says that if you replace the broken windows in your neighborhood there will be less crime overall. The murder of Marisol’s brother Carlos was a broken window that needed fixing. And I decided right then: I would help Marisol…”

Broken Windows is the sequel to my Shamus Award-winning mystery-thriller White Heat. In White Heat Duke does something that inadvertently leads to the death of an innocent person. In that book, he tries to make amends for his actions. And in Broken Windows he’s still doing penance for unintentionally and indirectly causing that woman’s death. So maybe he’s a good guy who just wants to help Marisol out or maybe he’s doing it to try to fix his own “broken window”.

Like many of us, Duke is a mixed bag in terms of a person. He’s someone who wants to do good, but who sometimes can’t, and who sometimes does the wrong thing simply because it’s expedient. But he does have a conscience and wants to make good for his misdeeds. At the same time he has to contend with his sidekick and partner, Jack, who’s the epitome of unPC. And, while Duke and Jack don’t always see eye to eye, each knows the other has his back. In some ways, Jack is like the devil from the old cartoons on Duke’s shoulder, egging him into doing the wrong thing. 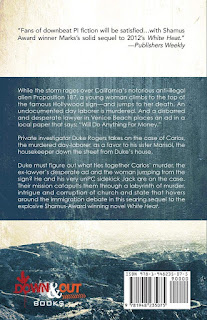 So, in Broken Windows, set in 1994 during the time of California’s notorious anti-illegal alien Proposition 187, Duke and a reluctant Jack are sucked into the case of Marisol’s murdered brother At the same time, a young woman climbs to the top of the Hollywood Sign and jumps to her death. A disbarred lawyer living in the not-so-good part of Venice Beach places an ad in a local weekly, “Will Do Anything for Money.” And somehow they’re all connected, but the somehow is what Duke and Jack have to figure out, while trying not to get killed themselves.

In the course of the case, Duke and Jack find themselves in the middle of the immigration quagmire, embroiled in the Prop 187 debate even to the point of finding themselves at Smuggler’s Gulch near San Diego, one of the main routes for people to sneak into the US. They find that things aren’t what they seem and through Marisol even Jack begins to see the ambiguities of the immigration debate.

And, though the story is set in 1994 and revolves around a real situation, that of the Prop 187 chaos, we might look at it as a precursor to what’s happening with the immigration debate today. And if we don’t find a way out of the immigration quicksand, we’ll find ourselves continuing to sink, until the muck is over our heads and our grandchildren are writing stories around the immigration issue of their time and saying to each other, ‘the more things change, the more they stay the same’.

And thank you for hosting me, Kevin. I’ve enjoyed being here.

Paul D. Marks is the author of the Shamus Award-winning mystery-thriller White Heat, which Publishers Weekly calls a “taut crime yarn,” and its sequel Broken Windows (dropping 9/10/18). Publisher’s Weekly says: “Fans of downbeat PI fiction will be satisfied…with Shamus Award winner Marks’s solid sequel to… White Heat.” Though thrillers and set in the 1990s, both novels deal with issues that are hot and relevant today: racism and immigration, respectively. Marks says “Broken Windows holds up a prism from which we can view the events burning up today’s headlines, like the passionate immigration debate, through the lens of the recent past. It all comes down to the saying we know so well, ‘the more things change, the more they stay the same’.” His short stories appear in Ellery Queen and Alfred Hitchcock Mystery Magazines, among others, and have won or been nominated for many awards, including the Anthony, Derringer and Macavity. His story Windward, has been selected for the Best American Mystery Stories of 2018, edited by Louise Penny & Otto Penzler, and has also been nominated for both a 2018 Shamus Award and Macavity Award for Best Short Story. Ghosts of Bunker Hill was voted #1 in the 2016 Ellery Queen Readers Poll. He is co-editor of the multi-award nominated anthology Coast to Coast: Private Eyes from Sea to Shining Sea. www.PaulDMarks.com