Aubrey Hamilton Reviews: The Boy from the Woods by Harlan Coben 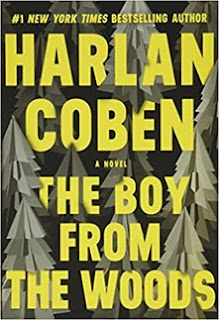 In the newest thriller from Harlan Coben, The Boy from the Woods, we meet Wilde, who was discovered as a child living on his own in the forests of New Jersey. His parents could not be located and he grew up with a kind foster family. After a military career, he settles in his hometown where he has an on/off relationship with the widow of his childhood best friend, who was killed in a car accident. The best friend’s son tells Wilde and his grandmother, a well-known criminal lawyer, about a bullied classmate who has disappeared. Wilde searches for her, finds her, she returns to school for a week, and she disappears again. Her father isn’t worried and the police consider her a runaway. When her classmate, the son of a television producer, disappears, the two are linked, until the ransom note for the son arrives, asking for early video tapes that will supposedly prove criminal activity by a presidential hopeful with a cultlike following. All sorts of echoes of the current political environment in the U.S.

It’s easy to get distracted from the missing and kidnapped teens story line as there are lots of threads to follow in various subplots, one of them is from Coben’s 2019 thriller Runaway. A brief one is Wilde’s purchase of a DNA testing kit in hopes of identifying his family. I was a little surprised this line wasn’t pursued earlier when the authorities were looking for his parents. Again, as in Runaway, there is an indirect reference to Windsor Horne Lockwood III from Coben’s Myron Bolitar series.

The bullied teenager and her savage tormentors are depressingly familiar. No matter how much lip service parents and school administrators give to anti-bullying sentiments, abusive situations are alive and well in high schools. Not as many curves and twists as in Runaway and a little unfocused in its plot, this tale still has several surprises and the final one is a doozy.