For this final Friday in November as you surface from your Turkey driven coma, I offer you Barry’s Review of Instruments of Night by Thomas H. Cook. The review originally ran in late 2007 and then again in 2012, so it has been quite some time since it saw the light of day here. After you read his review and mosey around here, make sure you ride over to Patti Abbott’s blog as well as Aubrey Nye Hamilton’s Happiness Is A Warm Book blog and see what they suggest today. Be sure to comment with your own FFB reviews and links. 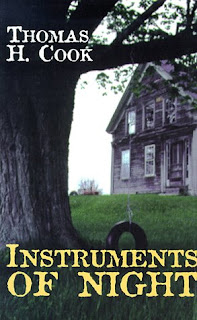 Novelist Paul Graves is a man literally haunted by his past. The ghosts of one grim and brutal night invade his thoughts daily, summoned or unbidden, and lend their power to his books.

Raised on a small farm in , was already an imaginative young man who had taken a liking to writing when his parents were killed in a car accident. Paul was twelve and his sister Gwen was sixteen. The two continued to live on the farm for about a year until the night Gwen was tortured and eventually slain by a sadist named Kessler and his tremulous sidekick Sykes. Forced to witness his sister's agonies, Paul retreated into a long silence.

In the story's present, a forty-five-year-old Graves lives a life of self-imposed relative seclusion in . He's the author of a popular series of novels set in that city at the end of the 19th Century. They feature a detective named Slovak who, much like Sir Denis Nayland Smith chasing after Dr. Fu Manchu, pursues the bloodthirsty Kessler and the slavish Sykes from murder to murder, aging and wearying in the process—much as his creator has aged and wearied and considered self-extinction. 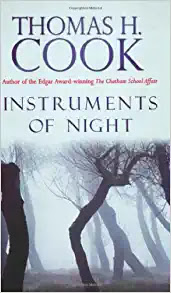 Graves is invited to Riverwood, an estate in the that remains a family home and also an artists' colony, by wealthy Allison Davies, who grew up there and who has never left. She offers him an odd commission: look into the fifty-year-old murder of her closest friend Faye Harrison, who was killed at the age of sixteen, and write a story about it that will satisfy Faye's dying mother about who killed her daughter. The story needn't be true, only plausible.

Reluctant at first, finally accepts the job and takes up residence at Riverwood, where he's given access to all of the information about Faye's death, including the detailed reports by the investigating police detective, Dennis Portman. He is joined by Eleanor Stern, a playwright, who is quite possibly more intrigued by the project than is.

What might seem like a dry historical probe is rendered dramatic by 's vivid imagination. He visualizes the players and the scenes they enact so as to carry the reader into the moments Portman's summaries only sketch. His investigations lead to revelations about Riverwood and its denizens in that long-ago time, and about 's own past.

I should add, for Golden Age fans, that although Instruments of Night is very much a psychological thriller, it's also a fairly-clued mystery. The key clue is extremely subtle and easily overlooked. 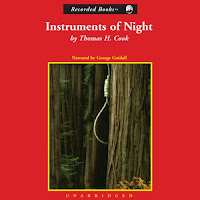 I discovered Edgar Allan Poe in early adolescence, William Faulkner in my late teens. What struck me about both of their prose styles was the quality of envelopment: you might be sitting in a riotous, crowded stadium during the Super Bowl or the World Series, but if you were reading one of their stories, you'd feel as though you were alone in inky blackness, aswirl in the story's events. Thomas H. Cook—at least in this novel, the first of his I've read—conveys that same envelopment.

So why am I torn about this book?

It's very well-written, Cook's prose often lyrical. The characters are properly fleshed-out, the pacing spot-on, and the suspense carefully built and sustained.

But its tone is unremittingly dark. In short stories like Poe's, where uniformity of tone was a goal, that quality is tolerable. Many of Faulkner's darker novels were occasionally relieved by moments of levity. Not so Instruments of Night. Cook sometimes overdoes 's recollections of his own horrors. Thus, compelling as the storyline is, I found it hard to sustain long periods of reading. I can't recall ever having read anything darker: not Sanctuary, The Sound and the Fury, or Light in August. Nor Bernard Malamud's The Fixer. Not even Elie Wiesel's Night.

With that caveat in place, I can recommend Instruments of Night as worth your time.

For more on the Golden Age follow the link http://gadetection.pbwiki.com/

Derringer Award-winner Barry Ergang’s written work has appeared in numerous publications, print and electronic. Some of it is available at Amazon and at Smashwords. His website is http://www.writetrack.yolasite.com/ where he is available for your editing needs.