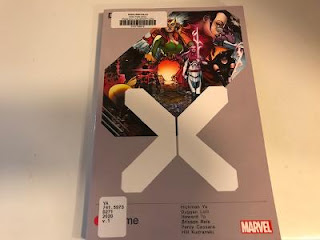 Dawn Of X, Vol 1, by numerous writers and artists collects the first six issues of the first launch titles post House of X, Powers of X. This book is the perfect jumping on point for people who wish to try the various series where each offers something different. This is a great way of reading the series for people who plan to read all the titles and want to read them chronologically. Each series features a different writer, a different artist, a different team, and a different storyline targeting a different aspect of the genre.

The first issue in the set is the first issue of X-Men by Jonathan Hickman and Gerry Duggan. This storyline is an action drama that focuses on Cyclops, his family, and Magneto. This title is for those who want the standard superhero action packed read along with a little bit of humor. I enjoyed this title the most out of the book and especially Cyclops and Magneto’s parts. This title features one of the best lines in this collection, “Be careful, they’re sure to be savvy – all these apes have PhDs!”  If that does not intrigue you, I do not know what will.

The second issue in the set is the first issue in the Marauders series by Gerry Duggan. This read focuses on Kitty Pryde, Storm, and other X-Men rescuing mutant refuges from nations where they are being oppressed. The team operates from a boat and are acting like pirates and outlaws to rescue people across the world and bring them to safety. This book is action on the high seas and has a us against the world type storyline. 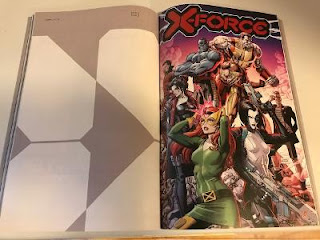 The third issue in Dawn of X, Volume 1, is the first issue of the series, Excalibur by Tini Howard. It features Betsy Braddock, Apocalypse, and others who are all dealing with how the magic community is reacting to the X-Men forming their own nation. This is the title for people looking for magic and adventure. This team of X-Men must face off with Morgan Le Fay and others who seek to use magic to wipe the X-Men out. This book is heavily orientated into British Mythology and Arthurian legend.

The fourth series featured is New Mutants by Ed Brission. As noted in the title, this read is focused on the “New Mutants” who are young adult X-Men going on wacky space adventures. This is the classic road trip goes wrong idea and is set in space. This is a comedy buddies drama type deal that really didn’t work well for this reader. As comedy is subjective, your appreciation of the read may differ.

The fifth issue is the first issue of X-Force by Benjamin Percy. This read features a team of X-Men doing cloak and dagger things and thus if the special forces and spies type part of the read. On this team is Wolverine, Jean Grey, Beast, Colossus, and other. This is the title for people looking for heroes doing morally gray things to protect others. 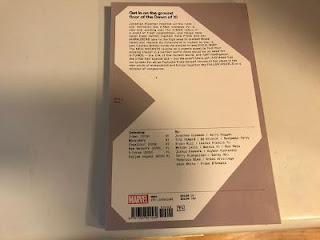 The sixth issue and final title in the book is Fallen Angels by Bryan Hill. It features Psylocke, X-23, and Cable, going after the creators of a new tech-based drug that is creating addicts and killing users all around the world. This series features a team of soldiers who are looking for a fight. They are adrift as they now have a home and need a new mission. Stopping a bunch of drug dealers from killing people sounds like a worthy fight.

All these various titles feature different artists and writers using different X-Men to tell different types of stories. Some characters cameo in other series, but for the most part, whomever is on the team of that title is the stars of that book. If one likes one of the issues in this volume, they could go find the first volume of that series and read the rest of those issues after reading the first issue here. One could also get Dawn of X, Volume 2, and read the second issue of each of these series in one book.

I highly recommend this book for new X-Men fans or old ones who want to try the various titles and find ones that fit what they like to read. I enjoyed all these titles to varying degrees. My least favorite were New Mutants and Fallen Angels. New Mutants relied far too much on making people act stupid for plot. The problem with Fallen Angels is the read needs far more time to explain what the series is going to be about. My favorites were the action reads of X-Force and X-Men, but I also enjoyed the pirate aspects of the Marauders and the magical based adventures in Excalibur.

There is a little something for every type of X-Men fan in Dawn of X, Volume 1, and it is very much recommended.

My reading copy from the Highland Hills Branch of the Dallas Public Library System.