Contributed by friend and Texas author, Mark Troy, who has a number of books for you to read.

A little-known taco truck is rapidly gaining in popularity with late-night residents of Chicago who seek it out for the “specials” they can find nowhere else. From July through December Jesse’s Tacos serves up eclectic dishes and something extra for desperate people with a need to make a score, to even a score, or to survive. You won’t find Jesse’s Tacos advertised on television or listed in city guides. They are strictly word-of-mouth. A friend tells a friend. So where is this truck located, you ask? All over Chicagoland. There is no one location. Jesse’s moves frequently. Hey, they’re a truck. It’s what trucks do. Jesse’s has an ever-expanding customer base to keep up with, and law enforcement to keep ahead of. But if you’re jonesing for something different and spicy, for some extras you can’t find anywhere else, here is your underground guide to Jesse’s locations. Just don’t say I sent ya. 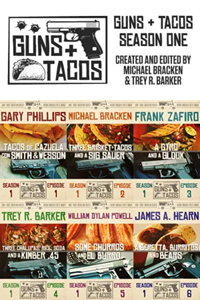 * Near Alvarado Street. The special: A Gyro.

* Halstead Street on the South Side. The daily special: Three Chalupas, Rice, Soda. 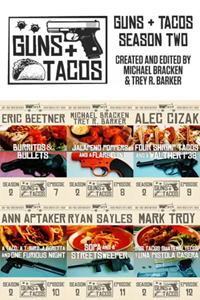 * South Clark, a few blocks from the El. Burritos again.

* No location given. Jesse’s is lying low. The special: Jalapeño Poppers.

* Near Princeton Avenue, just over the border from Gary, IN. The special: Four Shrimp Tacos.

* A strip mall off South Racine near the river. Tacos are featured.

* The Grand Crossing Neighborhood near the old Blockbuster. The special: Sopa.

At Jesse’s, its not the daily specials that make customers’ mouths water. It’s the “extras” that bring in the traffic. Check out the “extra” menu and see if you don’t agree:

A Smith and Wesson

Bullets and a revolver.

“Left the bag . . . next to a homeless individual.” Augustina Blanchard, M.D.

“Threw the churros, which smelled like burnt hair, into the trash can.” Tucker Mitchell.

“A complex interplay of spices, dancing on the palate,” Brian Piccolo.

“Jesse wants to go straight and open a restaurant.” Tommy.

“As much as I hated to admit it, the damn thing was tasty as hell.” Tim.

“Even prison food is better than this.” Joey.

“The capsaicin made [my] mouth burn and [my] eyes water.” Carl Ember.

“The cute Chinese cook . . . gives me a nod with barely a hint of a smile, an adorable, deadly smile.” Maureen Eckles.

“I toss the taco to a mangy dog loitering in the vacant lot.” Maureen Eckles.

“After one bite that wouldn’t go down . . . I tossed the rest of the burrito into the gutter.” Anonymous.

“The shrimp taco tasted like something [I’d] expect a pelican to throw up on the sidewalk.” Sal “Bible Boy” Anthony.

“Garlicy. A spritz of lime in the soup brought all the flavors together.” Beau.

“That bastard knows I can’t eat fried food. I think he wants to kill me.” Arturo Carrasco

“I wouldn’t give this to un policía.” Diego.

Jesse doesn’t do mailing lists and they don’t have a newsletter, but if you’re wanting more information, start here:

Thank you for sending it my way.