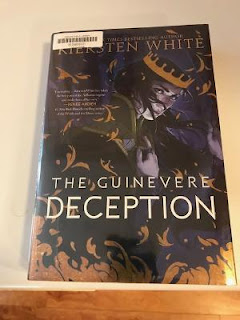 The Guinevere Deception by Kirsten White is the first book in a new series that is inspired by the legend of King Arthur and is billed as a retelling of it with a new spin. In this universe, King Arthur has been forced to send Merlin away due to a strict ban on magic. If King Arthur had not sent Merlin away, he would have been deposed because the people of Camelot do not trust magic. Despite the fact that King Arthur fights magical threats and uses a magical sword to defeat them, the people of Camelot want magic and anyone who uses magic---except for the King—banned from the land.  Regardless of what the people want, which King Artur will comply with not to be deposed, he still needs more than his sword. He needs a magical protector to protect him from all foes who use magic as a weapon.

Merlin has a unique plan. He will send his own daughter to live as a deceased princess named Guinevere. She will give up her real name, her memories, and everything she has known to be Princess Guinevere. She will marry the King, become his Queen, and his protector. Merlin is sacrificing his own daughter so that King Arthur will live and fulfill his destiny. For that to happen, she will have to face enemies inside and outside of Camelot who seek to destroy the young King and Camelot itself.

This is a book that that is not easy to talk about without ruining the read. It can be said that this version of the legend blends new and old elements from the various myths and clearly is at least partially inspired by the Merlin BBC TV series.  The Guinevere Deception is an intriguing tale that mixes humor, action, drama, and magic, in a very good start to a new series.

The next book in the series is, The Camelot’s Betrayal, and it is currently on order at the library system.