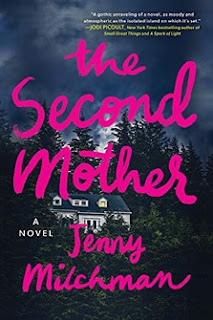 The Second Mother by Jenny Milchman (Sourcebooks Landmark, 2020) is Milchman’s fifth book in seven years. In that time her work has achieved critical acclaim, winning the Mary Higgins Clark and Silver Falchion awards and being shortlisted for PEN/Faulkner, Macavity, and Anthony awards; receiving starred reviews from Publishers Weekly, Library Journal, and Booklist; and showing up on Strand Magazine and Suspense Magazine's Best Of lists. She is the co-chair of International Thriller Writers' Debut Program and a member of the Sisters in Crime Speakers Bureau.

Julie Weathers and her husband have been living in an alcoholic haze since the sudden death of their daughter. During an intermittent period of sobriety, she decides to leave the small town in New York State she’d lived in all her life and start over somewhere else. In her fuzzy and grief-stricken frame of mind, she decides a teaching job on an isolated island off the coast of Maine would be just right.

The island and the surrounding ocean are exquisite in their beauty. The lonely house she is given to live in on the other hand is strange. The people who lived there previously still have keys and feel free to wander in without notice. Small items appear and disappear, her dog is let out one day while she runs errands, weird sounds; in short, it’s scary. Then there’s her job. One of the children in her class is an odd youngster. His mother appears to take no interest in him, and his grandmother takes far too much. The grandmother rules the island and wants Julie to know it. She is obsessed with keeping families with children on the island to maintain its centuries old way of life and obviously to keep her power and influence which is waning as families move away. Julie is caught up right away in trying to help the grandson while keeping the grandmother at bay. She’s also unexpectedly attracted to one of the islanders.

Beautifully written, this book is billed as a psychological thriller but I heard echoes of Victoria Holt’s Gothic novels as I read. Young woman trying to escape her past – check; isolated and dangerous locale – check; resentful and powerful older woman– check; troubled child – check; attractive single man who rescues her from danger – check; old creaky house with unexplained noises – check. Pretty much hits all of the right buttons to be considered a contemporary Gothic. The icing on the cake is Depot, Julie’s huge Newfoundland-mix rescue dog, who will appeal to animal lovers everywhere. A fast-moving engaging read.