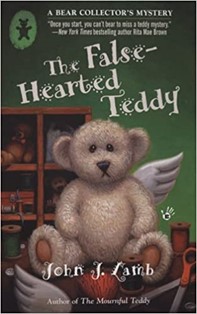 The Bear Collector mysteries by John J. Lamb were published between 2006 and 2009. Only five titles in the series but they earned a devoted following who still miss them. One of the perils of publishing is the compulsion to identify a niche and when a book doesn’t fit the niche assigned it especially well, readers who would love the book are more likely not to find it, losing the book essential reviews, praise, critical acclaim, and ultimately sales. This is what happened to this series, I think, which deserved more attention than it got. The teddy bear angle attracted cozy readers who didn’t bargain for the policework in the books, and police procedural readers didn’t consider them because of the teddy bears.

These books sound fluffy and cozy and they are, to the extent they are centered around an ex-cop and his second career as a high-end teddy bear artisan. However, they are also rock-solid police procedurals. Lamb writes authoritatively and with experience about the process of investigating homicides and his knowledge informs nearly every page. He is also invested in the world of artisan stuffed animals, which is big business with the potential for franchise sales to toy manufacturers and Saturday morning cartoon shows. In this aspect these books remind me a good deal of the Emma Lathen books which featured John Putnam Thatcher, a banker who was forever getting involved in murders committed for money. In each Lathen book the reader received an education in a specific industry while following the banker/amateur detective.

In The False-Hearted Teddy (Berkley, 2007), the second in the series, the economic side of the business is clearly displayed. Brad Lyon and his wife Ashleigh travel to Baltimore for a national teddy bear convention and public show. This show is important because of the industry judging and awards and the attendant sales and publicity. Receiving one of the awards can mean a significant boost to an artisan’s career. One of the exhibitors dies suddenly after being accused of stealing her bears’ designs, which a big-time toymaker had offered to buy and mass produce. Brad unofficially starts looking into the evidence, invoking the ire of the investigating officer, and is promptly arrested for the murder.

The beginning chapters of the book are mostly centered on the bears but once the murder is committed, the police procedural side takes over for the rest of the story. The comments on the traffic and area landmarks are entertaining to residents. There is an indirect reference to Mystery Loves Company, a mystery bookstore that resided in Fells Point for a long time and has since moved to Oxford, Maryland.

These books are still in print, which should tell the publisher how much of a mistake it was to drop them, and are therefore readily available. Recommended for readers of middle-of-the-road mysteries looking for a new pandemic series.

I loved this series, and wish it had continued, although the last one in the series was the weakest.

I have no memory of ever seeing anything about them. Of course, that probably says a lot more about me than anything else. It sounded like an interesting idea.

I checked and my local library does not have any of the series. With money being very tight and Interlibrary being unavailable as it has been for months, I am out of luck, at least for now.

Not that I do not have a ton of books here to read. And, as my kid has taken to pointing out, if I am reading, I am not writing my own stuff.