After you read the reviews, make sure you head over to Patti Abbott’s blog as well as Aubrey Nye Hamilton’s Happiness Is A Warm Book blog and see what they suggest today. Todd Mason is back collecting links so you will have even more suggestions on his Sweet Freedom blog later. 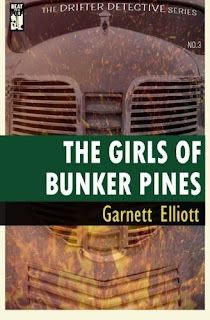 It began with The Drifter Detective and continued on with Hell Up In Houston and now traveling private investigator Jack Laramie is back in The Girls of Bunker Pines. It is 1956 in Kilgore, Texas as a hail storm pulls Jack Laramie from an intense dream of his B-17 being shot down over Germany during the war. While he is back home and has pretty much adjusted to civilian life by wandering across Texas in his Desoto hitched to a horse trailer while working as a private investigator, the nightmares of war persist from time to time. His normal solution of downing a couple of shots won’t work this night as he is on a surveillance job outside a traveling church revival led by pastor Dalton Byrnes.

He may have fallen asleep, but it is clear that nothing much is going on.  The pastor may be a lot of things, but he isn’t having sex with his client’s wife. Though she does seem very interested even if the attention is not reciprocated. While one case seems to be drawing to a close, Jack’s being there has led him to meeting Joe Crewes. One look at Joe and Jack knows he sees a fellow veteran with his own demons.  Joe Crewes served in Korea and has a very complicated case for Jack Laramie if he is interested. 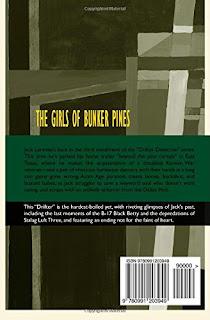 What follows is a complicated tale set in 1956 interspersed with Jack’s memories of flying in a B-17, being shot down over Germany, and the aftermath. Those flashback sections are intense and are skillfully woven into the main storyline of a client who may or may not be helped by Jack. The Girls of Bunker Pines: The Drifter Detective Series is another solidly good read that works on all levels all the way to the end. While it would obviously be best to read the series in order, one could read this as a standalone before going back and picking up the other installments of so desired. Author Garnett Elliott puts you in the moment with Jack and does not let go till the very end.