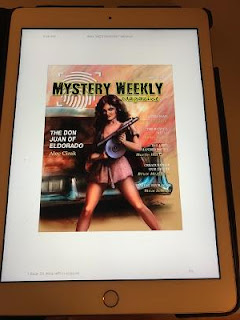 Mystery Weekly Magazine: May 2020 issue opens with “The Rusted Beetle” by James Nolan. He has been able to hide in the tiny village of St. Julien in France for some time. He thought he was safe until the man with the black backpack showed up at the same time the legendary wind that is said to have made Van Gough mad started up again. He ran to escape prison, but he may very soon find himself imprisoned just the same.

It is the 60’s and the narrator wants a raise. Like all bosses, pretty much everywhere, Mel of Sweatshop Comics isn’t about to raise the pay of anyone. Certainly, he isn’t going to give our narrator one in “Letterman” by Martin Zeigler. The problem is that now that the narrator asked, Mel intends to detail why it won’t happen as things get heated in a lot of different ways.

It has been awhile, but private investigator Jack Laramie is back in “The Don Juan of Eldorado” by Alec Cizak. Dodging the sink holes in the flat roadway somewhere in central Texas was possible with the old Desoto and attached horse trailer, but when the guy in front of him lost the load of four dishwashers off his truck, the resulting shrapnel was everywhere and killed the tires on his trailer. The trip into nearby Eldorado for tires will also lead him into a murder case and more.

Ike Connolly has a tough job to do as the meeting of Chapter #231 of “The Mike Association” begins. He has to tell the assembled Mikes in the backroom of Mike’s beer emporium that one of their own is dead. Mike Cooper was murdered and while he was certainly not representative of how Mikes normally act and behave; he certainly did not deserve to be murdered. Private Eye Mike Connolly is also distressed to learn that the police have arrested Mike Witherspoon for the murder. Clearly, that can’t be right as one Mike would never kill another Mike in “Paying your dues” by Steve Schrott. It is worth noting that no Kevins were involved in any way, shape, or form in this tale and if they had been, the case would have been solved quicker and with far more style, class, and humor due to our clearly superior abilities.

The lesson Marcus Lattimer learned in the fourth grade have served his life well in “Creatures of Our Desire” by Bruce McAllister. That lesson shaped him in a way that nobody expected. He was not the only one affected by it either. 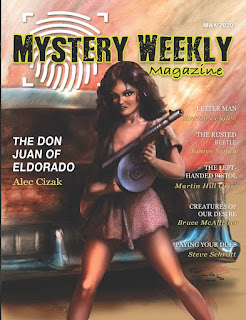 Stopping that bank robbery in the Sierra Nevada’s was a mistake as it brought him attention. The last thing he wants or needs is attention from anyone in “The Left-Handed Pistol” by Martin Hill Ortiz. He now has the full attention of Sheriff Wilton. That attention to him, his actions as well as his past, is going to be a problem one way or another.

The “You-Solve-It” in this issue is “Desperate Letters” by Stacy Woodson. Mail Carrier Mabel Fitzgibbon is asked to help out on a missing person’s case by the police chief and a U.S. Marshal. A clue could be the way he left the marquee on the old town theater. Stan and Mabel belong to the same local puzzle group so if the marquee means anything, law enforcement hopes she can figure it out.

The issue concludes with the solution to the April puzzle titled “The Purloined Pearls” by Laird Long.

As always with this publication, the read has a lot of variety across the mystery genre. Humor occasionally makes an appearance in Mystery Weekly Magazine: May 2020, but the main focus is on the mystery each tale presents. This issue is another entertaining mix of solidly good stories and enjoyable reads.