Aubrey Hamilton Reviews: Gumshoe on the Loose by Rob Leininger 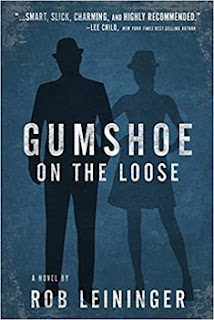 The Gumshoe series by Rob Leininger follows the adventures of Mortimer Angel, who is a fledgling private investigator. He was a career IRS agent and then decided he couldn’t take the strain of the job any longer. He now works for Maude Clary, who owns a private investigation agency in Reno, Nevada, where Mort is gaining enough hours in the field to get his own PI license. Maude is a short, chunky battle axe, always worried about money. Mort is tall and lanky; he is always cutting corners and hiding the fact from Maude. He is also irresistible to women. If this sounds like an echo of the Bertha Lam and Donald Cool series by Erle Stanley Gardner, that’s because it is. There are far too many similarities to be otherwise. Not a carbon copy, but quite alike.

In Gumshoe on the Loose (Oceanview, 2018) Mort is recovering from his most recent adventure and Maude is going to visit family in Memphis. She threatens him with all sorts of retribution if he gets into any trouble while she’s gone. Of course the first thing Mort does is discover the definitely murdered body of a missing pop music star and is photographed near the crime scene. The police have no choice but to consider him a suspect at first. The late rapper turns out to have had some reprehensible habits, thereby earning any number of enemies of which Mort can show he is not one. He’s then hired by the father of a potential suspect to quietly investigate behind the scenes, only Mort doesn’t seem to do quiet particularly well.

He unintentionally acquires an assistant in the form of an attractive young woman. Of course. Their inquiries take them to Las Vegas and its casinos, where a side-splitting scene in the book occurs. The ending explodes in action, taking the story from light and frothy to deadly dangerous in just a few pages.

A fun read, not to be taken seriously by anyone hoping to learn about private investigation as a career. Clearly Leininger’s brand of fantasy PI is popular. Book 5 in the series is due to be released next year.