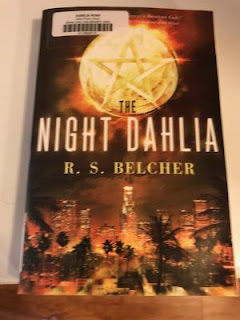 The Night Dahlia by R.S. Belcher is the sequel to Night Wise. Laytham Ballard is a John Constantine type figure who has now been hired by a high-ranking Faerie to find his missing daughter. Unfortunately, she has been missing more than a decade. To solve this cold case Laytham Ballard will have to face his past and scour the world for clues in his mission to find her.

If one enjoyed the first book then one knows what to expect. In this tale, Laytham Ballard edges are softened a bit more, but the core character remains the same. The Night Dahlia is one of those books where to tell much about the plot would kill the point of reading the book. It can be said that this book also features the same sort of humor, action, and lots of magic as the first and also has a lot of content that could make readers uncomfortable. It goes without saying, but will be said anyway, that this is a series that builds and thus these books should be read in order.

If one enjoys a story where the good guy tries to do the right thing, but lives in a world where it is hard to be good and makes mistakes, you should like this read. If you like John Constantine, you will probably like Laytham Ballard. The Night Dahlia is a good sequel that leaves readers wanting more.

My reading copy came by way of the nearby library my Dad used back in the day, The Audelia Road Branch of the Dallas Public Library System.