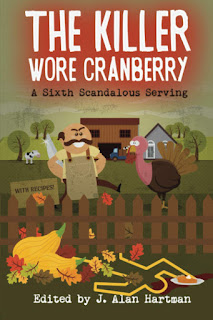 The Killer Wore Cranberry: A Sixth Scandalous Serving leads off with a very poignant introduction. In a note that honors the pain that many of us deal with this time of year, the loss of a loved one, Editor Jay Hartman honors author and friend, Earl Staggs. Earl was, and still is as his legacy lives on, a consummate storyteller. More importantly, at least to me, he was a good friend. Earl thought the world of my late wife and went out of his way to spend time with her and me. He was still present months after she passed as he checked on me and pushed me to get back to writing, reading, and more importantly living and staying sober. He was there for many folks in many different was as Jay notes in the introduction. This latest in the series from Untreed Reads pays homage to Earl in every short story in the book. A fitting tribute to a friend to all to all and a man who preferred the short story format.

The read kicks off with “Let’s Talk Turkey” by Herschel Cozine. Ulysses, the turkey, is missing and the young boy has come to the police for help finding him. Rick raised the turkey from an egg and wants the help of the police. The case of the missing turkey is going to become very personal by Sergeant Mills.

In “Drunk Raisins” by Karl Wainwright, 31-year-old Sheila would prefer not to go out to her grandparents’ farm and deal with all the relatives. Uncle Bob is boring, Grandpa Elliot is a misogynist, and Aunt Livia is convinced that our narrator is gay because she never brought a man. Truth be told, she would not bring anyone she liked or cared about to one of these holiday dinners. While the men watch football, the woman are in the kitchen doing the work and not getting along very well. That bitterness is going to carry over to dinner with wide ranging repercussions.

Thanksgiving 2017 find our narrator part of a task force chasing counterfeit currency in “Dinner with the King” by Joseph S. Walker. With her parents out of town and spending the holidays with his brother and his family, and having been dumped by her boyfriend not even a month earlier, New Orleans Detective Sarah Mason had done the personal and professionally smart thing and accepted the dinner invitations from New Orleans Legend Louis Cassel. The man is connected and is a legend in New Orleans. The fact he has invited her to dinner is her first clue that things are about to get very interesting in so many ways.

Stan the Dentist is not intending to go to Moe’s dinner this year. Moe and his mob buddies are going to have to do without him since Moe skipped his yearly checkup. Of course, it will not work out that way in “Some More Good Times” by Steve Shrott. You Do not tell Moe no.

Thanksgiving 1973 is the setting for “A Fowl Play Holiday” by Lesley A. Diehl. While it is true that a lot of the husbands in the extended family die young, but that is because the women are badasses and males are genetically weak. Things just happen that way. Our narrator is coming home for the week as she has been asked to come by Aunt Nozzie who has promised that nothing will go wrong this year. Obviously, it is not going to work out that way as it never does.

Vivian Witherspoon is the wealthy ruler of her extended family and others. With just weeks to live, she continues to rank her family members on a number scale that only she knows. While each person knows what their number is, they do not know why they are at that number or what it would take, short of killing others, to move up in the ranking. The nine family members all want that coveted number one spot in “A Very Darwin Family Thanksgiving” by Trey Dowell. 200 million dollars and everything in the estate is a powerful incentive to be truly number one in the winner take all tournament. 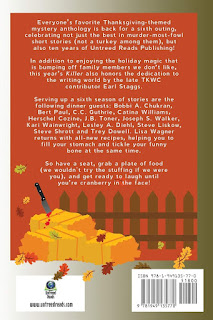 “Nameless Adventure of the Red Carbuncle Or Who Snatched Aunt Jewel’s Jewel” by Bobbi A. Chukran comes next where Henderson’s Jewelry Shoppe has been hit in Nameless, Texas. Kendra O’Keefe had just brought in the piece of costumed jewelry on behalf of her Aunt Jewel. Nearly 100 degrees and almost Thanksgiving, Kendra O’Keefe is hoping the piece fixed will lift Aunt Jewel’s ongoing awful mood. A gift from her late husband, the piece has sentimental value and is literally falling apart. It is not the kind of thing that Dennis Henderson would normally work on, but for Aunt Jewell who he went to school with, he is happy to work on it.  Of course, it goes missing during the daring daylight robbery. If that is not bad enough, Aunt Jewel is refusing to cook Thanksgiving dinner this year. Can Thanksgiving be saved? Can the brooch be recovered?

It should have been the real deal, but instead the senior citizen residents of the High Towers are getting a tofu turkey. Thirty pounds of Tofu shaped like a turkey and tasting nothing like turkey. While that is a crime on its own, it is not the primary one in “That’s No Turkey, It’s Murder!” by Bert Paul. The reason they are having a tofu turkey is complicated. The reasoning goes back weeks and involves the supreme commander of High Towers, Mrs. Plaid.

Kenzie’s mother has a lot of money and the interest accrues nicely each day in “Cranberry Beret” by Steve Liskow. Harry isn’t thrilled they are going to his mother in law’s house for Thanksgiving, but you do what you have to do. Vanessa Van Essen is 63 and on her sixth husband. While he loves Kenzie deeply, the rest of the family is horrible. This dinner is a reminder of that fact in multiple ways.

Detective Carl Todd is at work in the Homicide Department of the Dallas Police in “Pecan Pie Sacrifice” by C. C. Guthrie. He has two women at his desk who believe the recent death of 82-year-old Caroline Elliot was more than an accidental fall. The detective that originally investigated the death is off for Thanksgiving, so Carl Todd is talking to them two days before the big holiday. Jessica and Ashley are sure the woman at the house is not Caroline Elliot’s out of town daughter. They think she is there to loot the house. Dallas Detective Carl Todd is not sure they really know anything, but figures it does not hurt to do a little follow up on what he has been told. After all, a death in Preston Hollow gets news coverage and they have to be right.

They are making a movie of the novel, Justified Action by Earl Staggs, and a company known as “Fight Corps” is handling the fight chorography. Owned by Domingo Jack who is working on the set and wanting things to be going better in “Shaky Cam” by J. B. Toner. It is enough to cause a man to pour bourbon into the pumpkin flavored coffee that he loves. It is past time to really take control so that the fight scene is done correctly.

Vonda used to love the clubs. In her thirties now, going clubbing is not so much fun in “a ghost turkeys, and a pretty holiday sweater” by Catina Williams. It is the night before Thanksgiving and she is out on the town with her best friend Albert who goes by “Ab.” It is only because of him she is out. She is in a club where none of the guys are age appropriate and she feels like she is being stalked. It does not help that she is being haunted by a ghost who is choosing to make her presence known again to Vonda and Ab. Ten years later and the ghost, Kendra, has yet to move on in this final story in the anthology.

In addition to the author bios at the end of the book, there are once again numerous recipes scattered throughout the read. The recipes come from Jay’s sister, Lisa Wagner. With the pandemic raging this year, the focus in these dishes is to use supplies you probably already have in your pantry so you do not have to do extra shopping.

The Killer Wore Cranberry: A Sixth Scandalous Serving is another fun read in this long running and tasty anthology series. Each title is a good one where a mystery is always present and humor occasionally appears. Not only is the read a good one, the book also pays a wonderful homage to our friend, Earl Staggs.

Editor Jay Hartman provided an eBook ARC for this read several weeks ago with no expectation of a review.