Please welcome author Jeffrey Cohen whose books in the Asperger Mystery Series were very much enjoyed and reviewed here years ago. His new book, Inherit the Shoes: A Jersey Girl Legal Mystery is out now in eBook with print next month and audio in February. 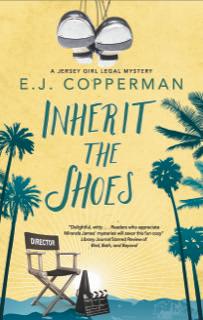 People come up to me (well, they used to come up to me when we were out in the world) and they say, “E.J.,” (these are very pushy people, given that we’ve never met before in this fictional scenario) (some of them are familiar enough to call me “E,” which is just odd) “how do you get humor into a story about murder?”

Let’s get past the idea that these imagined people who are imposing on my supposed peace and quiet are asking me odd questions, or that in my tortured little mind they have any idea who I am or what I do for a living or that they think I’m funny. Let’s just put those aside and consider the question: “How do you get humor into a story about murder?”

Humor isn’t the kind of thing you just layer on like frosting when something is finished and expect it to be the perfect touch. You have to have the right tone from the beginning. Readers can tell when you’re trying to be funny. If you’re trying too hard with “wacky” situations and the like, they’ll back away from you with some trepidation.

It helps if two things are working for the writer: First, you have to have a sense of humor. People who aren’t funny and try to write humor are just about the saddest beings on the planet. It’s sad. You shouldn’t do it. Ask your friends – the ones who always tell you the truth – if you’re funny. If they look away, don’t try to write humor.

Second, it’s a big boost if your character has a strong sense of humor. This is especially true in first-person narratives, because the character is telling the story directly to the reader. A sense of irony, at the very least, would be a requisite for the narrator in a funny mystery. I let my native New Jersey sarcasm (our National Language) speak for itself. Some people seem to find it amusing.

(This is especially true in Inherit the Shoes, the first Jersey Girl Legal Mystery coming on January 5 from Severn House. But don’t take my word for it – take 80,000 of my words for it and read the book.)

There’s also this strange temptation to write “funny” murders. No. Stop it. Having the victim drown in a sea of punctured water balloons or having an anvil drop on their head is fine if your protagonist is Wile E. Coyote, but if it’s a semi-realistic human being, all you’re doing is signaling to the reader that you really, really want them to laugh. There’s nothing more uncomfortable to watch than a desperate comedian.

Murder isn’t funny. If you try to make it funny you’re degrading the reality of your story and creating a situation in which the reader doesn’t care about the person who has been killed. That lowers the stakes of your story and probably doesn’t have the same impact you’re hoping it will. The murder should be a murder.

Now. That doesn’t mean there’s no fun to be had. The way your characters react to the killing is where you find your humor. Some will overreact (those are the likely suspects) and others will be blasé about it and pretend not to care (the likelier suspects). Your narrator, if it’s first-person, is probably the sleuth doing the sleuthing, and will view these people with, let’s say, a wary eye.

Comedians say there’s no subject that can’t be joked about. Murder, the ultimate crime, is not taboo. There are plenty of good mystery authors right now creating hilarious mysteries.

They’re just not showing you the flop sweat.

E.J. Copperman is the author of Inherit the Shoes, the first Jersey Girl Legal Mystery. E.J. also wrote the Haunted Guesthouse series, the Asperger’s Mystery series, the Mysterious Detective series and the Agent to the Paws series. That’s a number of series. It’s even a series of series. In any event, Inherit the Shoes is available as of January 5 and E.J. hope you’ll find it amusing. If you don’t, this whole post was probably a total bust for you.