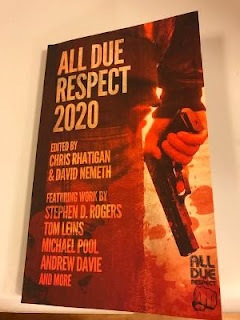 All Due Respect 2020 is the book version of the stories that appeared online at All Due Respect. Edited by Chris Rhatigan and David Nemeth, the stories appear in the book in the same order as they appeared each month on the website. These are crime fiction tales of characters dealing with hard problems.

The book opens with “Mad Dog” by Stephen D. Rogers. Mad Dog woke up our narrator and did it in a unique way to make sure he knew the seriousness of the situation. Mad Dog is a legend and he is her current mission. This is not good news at all.

Our narrator is on the hunt for Harold King in “49,000 Ways To Die” by Tom Leins. Mr. Rey was hired to do a job. He is highly motivated to find him wherever he is on the streets in this tale of British Crime fiction.

The wealthy Cindy-Lou Stepford caused Duane to lose his job at “Everything’s Coming Up Duane” by Michael Pool begins. His new unemployment gives him more bar stool time at the Shadybrook Cabaret. It also gives him time to contemplate how to teach her an unforgettable lesson.

It is unbearably hot at the house located somewhere just off the coastline of Mississippi. Vernon, sixty years old, is caring for John Tarden who is slowly growing worse day by day thanks to Parkinson’s disease. John still likes and wants his tea, good days or bad, and no matter the weather in “Perennial” by Andrew Davie.

It is cold and windy as “On The Edge” by Sharon Diane King begins as Malcom McLeod goes to see Sandy at the old motel. They have known each other for many years now. Things need to be said and settled.

On the same day that Kennedy banned travel to Cuba, the famous painting appeared. Don can see it from his perch on the fire escape. Getting to it is not going to be easy in “The Woman From Florence” by Preston Lang. Getting away with it is going to be harder.

Ray and Jimmy work the bodies at crematorium. It is their responsibility to move the deceased through the oven and take care of business. Clearly there is an opportunity to possibly be had in “What’s One More” by Jay Butkowski.

Back to England in “The Gangster’s Game” by Stephen Berry where Damian Jones is calling about a job. Chris knew it was a bad idea to agree to the job. He could blame that decision on the drinking. He now is being confronted with the results of that decision and now really needs some drinks. 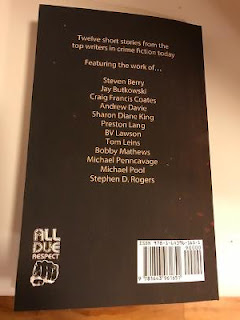 Dealing with the loss of a daughter is hell for Shainey Colchek. Today is the day when the ashes must be released in “Donors” by Craig Francis Coates. Grief is a multi-stage process before one can heal.

She went on the boat to interview Brian Lindley in “A Little Push” by Bobby Mathews. Not the way most of us would want to interview a known serial killer, but she has her reasons for doing it as he wanted. It has taken nearly a year to get the interview of a lifetime and she isn’t going to screw it all up now.

Barry has a meal to prepare and serve in “The Last Supper” by Michael Penncavage. You could have figured out that much by the title alone. This reviewer is not going to spoil things by telling you more.

BV Lawson brings the crime fiction to a close with “Quaking In My Boots.” Brett Holder is seriously impressed with the home of Nelson Sanzo. It should survive just about any earthquake California throws at the recent transplant. An angry ex is one thing, but an earthquake is something that terrifies Sanzo.

This collection of crime fiction tales is filled with characters dealing with hard problems in their hard lives. These characters are used to dealing with serious adversity on a daily basis. What they need are solutions. One way or the other, they usually find them in All Due Respect 2020.

All Due Respect Books (Down & Out Books)

In addition to the eBook copy I was sent by Editor David Nemeth, Johnny Wesner gifted me a print copy of the book for my birthday last month. The print version was what I read and reviewed here. Nobody had any expectation of a review.

These stories you have described here sound very good, and varied, Kevin.

They are. And thank you for reading and commenting.