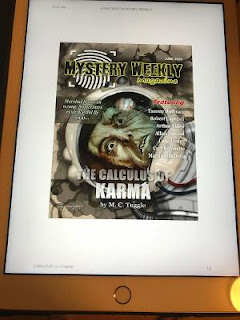 The story that inspired the cover, “The Calculus of Karma” by M. C. Tuggle, leads off the Mystery Weekly Magazine: June 2020 issue. Deputy Marshal Malcom Lamb has to deal with a body in an alleyway of the asteroid’s main camp. The miner is dead because of the crack in his visor that allowed the vacuum of space to enter his helmet. Whether it was an accident or murder by way of another turf war between groups of miners is up to Deputy Lamb to figure out. He better do it fast as trying to keep the peace on the asteroid near Jupiter is not easy.

Next up is “Afterglow” by Martin Hill Ortiz. Our narrator is hiding out at a ski resort known as “Redmond Ridge.” He’s told Tara, after a romantic interlude, that he works as a private detective. She then informs him that she would like him to find her ex-husband who just left one day years ago and just sends money for their son from somewhere in San Francisco. She thinks he has some connection to the mob. The same folks are also tied into the local resort. The fact that her ex sends a postal money order each week, month in and month out, gives him a starting point in his hunt for Arlen Haybert.

Investigative journalist Garrison Dallas knows who the killer is in “Seat 9B” by Luke Forster. The problem is that he is in a plane at 36,000 feet in the sky, over Arizona, and the killer is sitting right next to him. This is going to be an escalating problem.

She doesn’t have much going on when his dad calls in “Nothing Doing” by Carl Robinette. Some stuff has been stolen and he wants her to come down to his boat docked at West Harbor Marina and help. Daisy isn’t thrilled with the job, but she takes pity on him as his early retirement and divorce have taken a toll. Dad is also willing to pay some cash for her help. Not only is he willing to pay, he already has the number one suspect identified.

Deputy Sheriff Brick was trouble long before he grew up and got into law enforcement. He keeps messing with Danny and maybe has finally gone too far in “Ancient Cypress” by Allan Durand. The feud in Cajun Country has got to stop. Danny has had enough.

She met him in Church all those years ago. That meeting led to many things including now being present in court awaiting the jury’s verdict in “Gli Or Nogt” by Arthur Vidro. She was there for the complicated beginning decades ago; it is fitting she is there for what appears to be the end.

“In Praise of My Assassin” by Robert Lopresti comes next where the same personal tragedy has happened across multiple parallel universes. What good is time travel if you can’t get back to your own timeline and stop it or stop it in other timelines? Full of grief and rage, Sam keeps getting in his machine and trying to fix the past.

Reverend Mort, new in the area, was supposed to baptize Mary Rose Bandelier out at Hickory Grove Pond after church. That did not happen because he went missing. It has been three days now and the locals are not at all happy in “Angels Stirring” by Tammy Huffman.

The “You-Solve-It” in this issue is “Gallery Thief” by Peter DiChellis. A very valuable painting at the swanky Farthington Art Gallery is missing and police detectives are now on the case.

The issue concludes with the solution to the puzzle last month, “Desperate Letters” by Stacy Woodson.

I don't think I have ever run across this magazine. Nice reviews.

It is a good one. You can get single issue or a subscription deal. I am always several issues behind, but that is on me and not the mag. Thank you for reading and commenting. It was nice to find this when I got vertical and tried to come back to the world.

Kevin, you do a good job of summarizing the stories (without telling too much). I have a problem with keeping it brief but useful.

Thanks. I try. It certainly is far harder than a book review.