Aubrey Hamilton Reviews: Someone to Watch Over Me by Ace Atkins 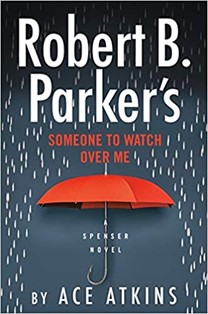 Someone to Watch Over Me by Ace Atkins (Putnam, 2021) is the ninth book he’s released in the series about the iconic private eye Spenser created by Robert B. Parker in 1973.

Spenser has always been inclined to mentor the youngsters who come his way, Paul Giacomin and Zebulon Sixkill most notably. The latest is Mattie Sullivan, a former client, who is acting as his trainee while she attends college classes. Mattie’s new client is a 15-year-old girl who wants to recover her laptop and backpack which were taken from her after the girl was assaulted by a much older man in an exclusive Boston club. The teenager is afraid to report the attack and insists on secrecy. Mattie is enraged after she learns her client is one of many girls victimized by this wealthy executive and his friends.

Spenser is understandably disgusted; he and Hawk become involved in Mattie’s case as the relatively simple request to recover a laptop and backpack gradually reveals a major sex trafficking operation that moves girls out of Boston to a private estate in the Bahamas. Word that Spenser’s nemesis The Gray Man serves as the security lead for the operation creates flashbacks to their last encounter, from which Spenser emerged critically wounded.

A significant subplot deals with the loss of Pearl II and the ways Spenser, Susan Silverman, and Hawk each react to the replacement puppy.

This story was clearly written in 2019 at the time Jeffrey Epstein and his colleagues were making headlines. Current events have provided cases for Spenser before; School Days (Putnam, 2005) is a notable example. Atkins follows the details of the depressingly sordid tale so closely that even the physical descriptions of the characters match the real-life players. The ending however is considerably different and far more satisfying.

Comparisons between Atkins’ version of Spenser and that of the series creator are inevitable. Spenser is not quite the same in Atkins’ hands but then Spenser in the early Parker books is not the same as Spenser in the last few Parker books either. Which one is the real Spenser? The differences may lie more in the plot treatments. For instance, the thread about the puppy seemed unParker-like to me. It was not the sort of detail I think he would have included.

I was glad to see a mention of Paul Giacomin, as he has thus far been missing from the Atkins books, and I wondered where he was. My very favorite bit though was Spenser saying he has Hank Phillipi Ryan on speed dial. Ryan is an actual well-known investigative reporter for Boston station WHDH-TV as well as an award-winning mystery novelist. Inside jokes are always fun. This book is a good thriller and essential reading for fans of the Spenser canon.