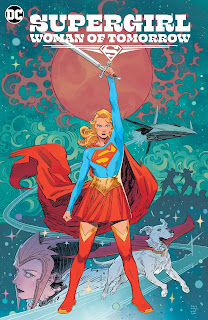 Supergirl: Woman of Tomorrow by Tom King is a story told from a young girl’s perspective after her father has been murdered. She is on another planet. She knows who did it. She is attempting to hire someone to help her get her revenge and she is in way over her head. Luckily for her, Supergirl is on other planet and has he dog with her as she sits in a bar drinking and celebrating her birthday. Supergirl is turning 21 and is just trying to celebrate in peace.

That plan goes out the window when the young woman is assaulted in the bar by the possible hitman  she was trying to hire to get her father’s killer.  Supergirl intercedes and the young woman latches on to her and won’t stop asking for help. Soon, they are in Supergirl’s spaceship and following the killer’s trail from planet to planet. This is a mission of revenge and is a road trip western themed science fiction story.

There is plenty of action and the actual tale is a good one, despite the initial premise. The artwork is incredible and some of the best comic book art I have ever seen. DC should lock this artist down for an exclusive contract if they are smart.

This book is a very good Supergirl story, but has the typical Tom King problem where the main character acts out of character. This Supergirl is quicker to violence then most typical depictions of Supergirl and cusses a lot more. This is an adult story since the book expands from a typical revenge story to something darker about halfway through. This could be triggering from some readers who are sensitive to genocide or attempted genocide. This story is told from the younger girl’s perspective with her interpretation of events. The epilogue is a little jarring in this readers opinion.

Overall, this was a good Supergirl book even if it was darker than most. Supergirl is still a heroic force for good who has a tragic backstory, which is also explored in Supergirl: Woman of Tomorrow by Tom King. Solidly good graphic novel and well worth your time.

My reading copy came by way of the Hoopla app through the Dallas Public Library System.

As good as this may be, I would still have to get over the fact that the damned dog is wearing a cape.

Yep. Scott reads a ton of this stuff and has commented before to me how little the cover art often has to do with the actual tale inside. When I was setting his deal up, the cover reminded me of back in the early 90s when they were again putting the cape on the dog for some reason.