Virgil Flowers is on a case about fake antique lumber when his boss Lucas Davenport calls him with another assignment. An Israeli investigator is on the way and needs to talk to a professor who lives in the area. In addition to being a professor the man, Elijah Jones, is also a Lutheran minister. The investigator wants to talk to the professor who apparently stole an important artifact from a dig in Israel and smuggled it back home. 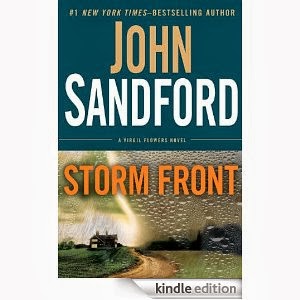 The investigator, Yael Aronov, isn’t telling Virgil everything she knows and Virgil knows it. He also quickly figures out that far more is going on than what he has been told or what Lucas led him to believe. It isn’t the first time Virgil has had to work two cases at the same time and he does it again here with both the lumber situation and the missing artifact.

At least the lumber does not involve Mossad, Hezbollah, and even worse---Texans.

Co-written with his partner, Michele Cook, the latest novel in this series from John Sandford is what one expects in a book featuring Virgil Flowers. His investigative actions are sometimes unorthodox; he will have a vigorous sexual fling with at least one character as well as the occasional fantasy about at least one other female, and the will be plenty of action and use of occasionally graphic language. Storm Front: A Virgil Flowers Novel is a fast, fun read that is not meant to be taken seriously or break new ground in terms of character development. The multiple storylines featuring fraud and deceit at home and abroad gradually weave together to a satisfactory and rather surprising conclusion. It’s another good, if not spectacular, read in the series which can be read as a stand alone or as part of the overall series.

I received an ARC of this title due to my participation in the “LibraryThing Early Reviewers” group for my use in an objective review. As such, my above review appeared there first last Saturday before appearing here on the blog.