Reviewing short stories either as a single or in a collection or anthology is always a bit tough as one does not want to give away too much. Books, such as this one, where every single story has plenty of twists and turns make it easy. What you have below is just the barest beginnings of these very complicated tales.

Beat To A Pulp: Hardboiled 2 opens with “The Takedown Heart: A Charlie Byrne Grind” by Kieran Shea in a claustrophobic gym office. The office on the outskirts of Atlantic City belongs to Dodge Lee.  He’s got a fighter by the name of Diego Guzman who might be good if, among other things, a young lady wasn’t involved.  Lee wants Byrne to check things out and make sure the young lady isn’t cheating on him. Once she is cleared and Lee as well as Guzman knows she is faithful, he can bear down and get ready for the major fight that is coming up. Byrne owes Lee and he agrees to keep an eye on things in and out of the ring and see what he can find out.

In a tale set sometime during the years he was in Rockford, Illinois, Joe Hannibal appears next in “The Loveliest Tale” by Wayne D. Dundee. Clyde Grammercy claimed a severe back injury in a lawsuit before leaving the case in the hands of his legal team and heading to Minnesota to stay with his parents. Hannibal is working the case on behalf of the insurance company and has witnessed the amazing physical abilities of the litigant with and without his sexual partner. But, Hannibal has also noticed he is not alone in his surveillance and that presents a problem.

He has a plan in “The Killing On Sutter Street” by Paul S. Powers and drove all night to get there. He is going to put the gun to the guy’s belt buckle and shoot him. He has fantasized about the path the bullet will take and the damage it will cause. He has just got to find him.

Three months of working out on the rim is over and Obed is glad to see the planet in “Down, Down, Down, Burns, Burns, Burns” by Jedidiah Ayres. Drug addiction and murder are just two of the elements at work in this very complicated story that resists summarizing.

Waiting for somebody to show so you can get paid is seriously annoying. Haji and Mario have been waiting for over an hour in “Split The Take” by Eric Beetner and enough is enough. Now they are going to go looking for Raul. This is not a good time to be known as somebody who knows Raul and therefore might know where he is. It also isn’t a good time to be Raul either. 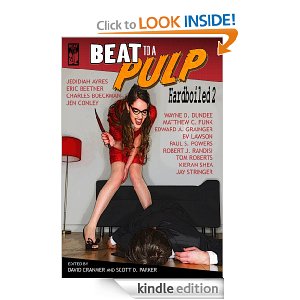 According to Hunter, Mortimer is dead in “Vicious Day” by Mathew C. Funk. It is just 7:03 am and there is a lot to do before sundown. Territory has be protected, resources allocated, and one does have to keep up appearances.

“Don’t do the crime if you can’t do the time” is an old mantra familiar to crime readers and writers everywhere. That saying comes to mind in “Hard Time” by Tom Roberts in a tale that puts a slightly different spin on it. Deputy U.S. Marshal Taggart is on the way to pick up the redheaded boy at the jail. The boy isn’t scared that the Marshal is coming as fast as his horse will get him there, but he should be.

Cash Laramie follows next in “The Wicked” by Edward A. Grainger.  It is 1911 and 56 year old Cash Laramie is taking a beating from a guy named Mowser. Preacher wants information and is using Mowser in an attempt to get it. That isn’t going to work.

Being the assistant production manager on the morning show is pretty much a thankless job. In “Double Your Pleasure” by BV Lawson, Fred knows his day job is lousy, why he avoids going home as much as possible, and that there is some creepy guy stalking him. He also knows the night job is getting old. What he doesn’t know is going to be a problem.

Eric Boswell is eager in “Ghost Story” by Jay Stringer. Moses Lita, has a couple of years on him and figures the world isn’t going to change that much. Something is happening out there on the nearby streets based on the screams and the noise, but, Moses wants no part of it. He needs to law low as the Gypsy is looking for him in a neighborhood on edge.

Danger from out there somewhere that can be heard but not seen is also part of the next story titled “It’s Coming “by Jen Conley.  In this case the screams are coming from a nearby homeless camp. They aren’t the only ones screaming either as Mandy’s crazy Aunt Ettie keeps screaming on about how “It’s coming.” Nobody knows what she is talking about either, but, she is screaming it as well as saying it more and more. Aunt Ettie needs help and she is not the only one.

Cops and bad guys alike are afraid of Ross Grimm. He scares bad guys because he makes them talk and does not care about rules and procedures. He scares the brass because they know one day a suspect will die by his hands and there will be hell to pay. He is a twisted cop and just part of the complicated puzzle in “Tough Cop” by Charles Boeckman.

The PI knows the three guys who just walked into his office in “Shut Up And Kill Me” by Robert J. Randisi mean business. Nick Delvecchio has had a bad beating in the past and isn’t going to let anyone get a jump on him. The woman who was in his office earlier in the day may have already done that.

Beat to a Pulp: Hardboiled 2 features not only an eclectic mix of writing styles and themes, there is a bit of a Twilight Zone feel to a number of stories. The kind of tale that would make Rod Sterling proud populates this book. At the same time there are plenty of reads in the book that are more conventional crime noir type stories that pack a solid punch. The result is a book that mixes a large variety of tales together in creating a very good read. The thirteen tales from the various authors and eras are all good ones and well worth your time.

This book was picked up last month during the free book promotion for my use in an objective review.