Some know him as Sam. Others know him as J.J. Walk or other names. Still others know him as Donald Harry Bliss. In a sense the man once known as Donald Harry Bliss is dead though he still lives. His wife is dead and he is drifting--literally and figuratively. The powerful Wall-Street mogul Francis Cherry still wants to get him. Unfortunately, good help is so hard to find and former MI6 operative Ian Goldworthy hasn’t proven to be good help, let alone any real help at all, despite his alleged talents and his pay package. Francis Cherry decides a radical new way of looking for him is needed and takes the hunt to a new and very public level. 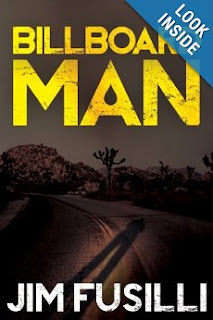 He isn’t the only one hunting the nameless drifter. A woman is dead in Memphis and he is a suspect. Then there is the guy looking for him to settle a perceived slight. When you have a moment with a woman another man considers his personal property, things can get nasty. Others are looking as well. The nameless drifter just wants to stay alive and somehow protect his estranged daughter.  Both ideas seem equally impossible when you are alone and on the run.

If you prefer your plots tightly focused with few players then this is not the book for you. Billboard Man is one of those sprawling reads with lots of players in far flung places causing things to happen and reacting to local events as well as events elsewhere. The ripples of various things, big or small, touch a lot of people and their actions and reactions create new ripples through the book. A book with many players and yet the action moves forward at steady pace in the various location across the country. The various storylines gradually come together in this read that is the second book of a new series. It can be read without reading Road to Nowhere as enough detail of past events comes through in this book.

Author Jim Fusilli has, according to the back cover copy of the ARC, eight novels out as well as numerous short stories. I first came across him with Closing Time and continued on through that series. A series I very much enjoyed and occasionally made reference to in recent years by way of my Friday’s Forgotten Books columns. Readers expecting that kind of books will not find such a read with Billboard Man. A very different style and tone is present in this noir styled thriller that showcases a very different aspect of the very talented author Jim Fusilli.

ARC provided by the author in exchange for my objective review.