Friday means Friday’s Forgotten Books hosted by Patti Abbott here. Having offered their double take reviews of THE GREAT MERLINI: The Complete Stories of the Magician Detective by Clayton Rawson and Richard S. Prather’s Strip for Murder in recent weeks, they decided that The Case of the Baker Street Irregulars  by Anthony Boucher should be covered this week.  Believing youth always goes first, Patrick is up first, and then Barry……

Anthony Boucher’s The Case of the Baker Street Irregulars is a delightful book full of wit and humour… but at the same time it is an incredibly frustrating book. Boucher, a prolific author, critic, and editor, was also a big Sherlockian and this really shows in this book, which I own in a highly attractive Gregg Press edition. Although it does not star his usual detective, Fergus O’Breen, it does connect to O’Breen in that his sister is a major character, as well as a police officer who appeared in The Case of the Seven of Cavalry.

When F. X. Weinberg of Metropolis Pictures set out to adapt the Sherlock Holmes story The Speckled Band into a film, the reception was initially enthusiastic. After all, it is a great story for adaptation, as Conan Doyle himself said. Unfortunately, Sherlockians everywhere suddenly turned against Weinberg when he hired the hated Stephen Worth to write the screenplay.

Nobody worse could have possibly been chosen for the job (with the possible exceptions of Michael Bay, who wasn’t around yet, and/or Raymond Chandler). Stephen Worth has expressed absolute hatred of Holmes and his stories, and he vows with his screenplay that he will “toughen up” the Great Detective and show his lily-livered followers just what a real detective does. As the author of several hardboiled detective novels and an ex-private eye himself, Worth seems like the ideal choice to butcher the source material.

Suddenly, F. X. Weinberg finds himself branded Public Enemy No. 1, and when he tries to get rid of Worth, the screenwriter points out a clause that says that if he doesn’t write the script, nobody will. Finally, to appease the Baker Street Irregulars, F. X. Weinberg invites a delegation to come to Hollywood to serve as unpaid consultants. The invitees eagerly accept, and the stage is set for murder: for not long after he crashes the welcoming party, Stephen Worth is found shot. But then his corpse disappears and the Baker Street Irregulars all find themselves involved in adventures that could have come straight from Conan Doyle’s pen… This sounds like a job for Sherlock Holmes himself! But since he isn’t around, the Baker Street Irregulars will have to do.

This book is truly a delightful read for the Holmes fan. You will find all sorts of great references to the Canon, such as a police officer named Sergeant Watson who must guard over the house in which the Irregulars are staying. And the next day when their adventures take place, they all have multiple connections to the Holmes Canon and the untold stories Watson alluded to, such as the adventure of the tired captain or that of Colonel Warburton’s madness. These are witty and wonderful, and they form the most delightful part of the book.

Unfortunately, as delightful as the book is, it quite simply falls apart by the ending. This is a book that logically makes little sense. There’s a huge paradox that you simply cannot ignore about Stephen Worth— and as much as you try to forget this gaping hole, the book won’t let you forget it, making it an integral part of the solution. There’s no reason why half the people involved should have acted the way they did. There are inexplicable masquerades that are apparently orchestrated by the same person even though multiple ones take place at the exact same time in different parts of town... There’s the ever-so-convenient aspect of motive, which brings up an entirely new plot hole: how the devil could P.I. Stephen Worth uncover dirty secrets, but these same secrets eluded the efforts of the entire LAPD???

And yet, not even this lack of logic makes for a surprising solution. Half of the ‘twists’ are painfully obvious despite the fact that a sieve holds more water than these revelations. You get sudden, dramatic reversals of character, and a killer who could have very well been anybody else with just a bit of tweaking. That’s not a sign of a strong detective novel.

The book’s saving grace, then, is its wit and the charm of all the Sherlockian references. As much as I enjoyed The Case of the Baker Street Irregulars, I had to swallow a very convoluted and fundamentally flawed mystery. While it’s a fun book, it’s of far more interest to the Sherlockian than to the casual mystery fan. If you absolutely love Sherlock Holmes, you will probably enjoy this book for the Sherlockian references. But if, like Worth, you can’t stand the fellow, or even if you are casually indifferent, your reaction could end up being very different.

The reader is warned.

Patrick Ohl ©2013
The nineteen-year-old Patrick Ohl continues to plot to take over the world when he isn’t writing reviews of books he reads on his blog, At the Scene of the Crime. In his spare time he conducts genetic experiments in his top-secret laboratory, hoping to create a creature as terrifying as the Giant Rat of Sumatra in a bid to take over the world. His hobbies include drinking tea and going outside to do a barbecue in -10°C weather. 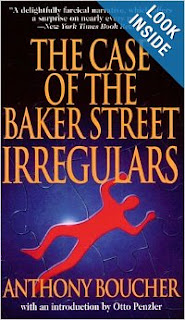 Mystery lovers who haven't read it will probably find The Case of the Baker Street Irregulars by Anthony Boucher a lot of fun. It combines bizarre situations, action, humor, lively and intelligent prose, and the advancement of several plausible solutions before the actual one is revealed.

Stephen Worth, ex-private detective turned hardboiled mystery novelist and sometime screenwriter under contract to Metropolis Pictures, is supposed to write a screen adaptation of “The Adventure of the Speckled Band,” which will be produced by F.X. Weinberg. When word of this makes the newspapers, Weinberg starts receiving irate letters from the Baker Street Irregulars. The want the screenplay entrusted to someone who reveres the Canon as they do, not a “rat,” as they refer to Worth, who writes hardboiled fare. For his part, Worth contemptuously dismisses the BSI as a bunch of “deductionists.” The studio's publicity director, Maureen O'Breen, who has no liking for Worth, a heavy-drinking lecher and prankster, suggests that Weinberg simply take him off the film and assign another writer. When Weinberg tries to persuade Worth to work on a different project, Worth balks at the idea and points to a contractual clause that effectively prevents him from being replaced involuntarily. From his position between rock and hard place, Weinberg hits on a solution and sends letters to each of the five Irregulars who have written to him, inviting them to Hollywood at his expense to serve as advisors on the film. When they agree, the studio provides a house for them at 221B Romualdo Drive, complete with a housekeeper named Mrs. Hudson.

To help tout the film, Maureen plans a party for the press. On the afternoon of the party, Maureen, trying to coordinate the preparations at 221B, is besieged by mysterious callers, messages, and telephone calls. Once things are under way, Stephen Worth makes a drunken, belligerent appearance. When he tries to hit one of the Irregulars, his wild swing hits instead one of the guests, Lieutenant Jackson of the police department. Jackson knocks him cold and he and some others carry Worth to a room upstairs to sleep it off. That ends the party. Later on, Maureen goes upstairs and finds a still drunk and abusive Worth standing in the doorway of the room. Moments later she hears a shot, blood blossoms under the hand Worth claps to his heart, and he falls back into the darkened room. When she bends to help him, something strikes the back of her head, rendering her unconscious. One of the Sherlockians carries her downstairs. When she revives and reports what's happened, Lieutenant Jackson goes to investigate.

There's a lot of blood in the room. There are other significant things there, too. There just isn't any corpse. The next day, each of the Irregulars has a peculiar, sometimes frightening adventure. Each adventure has its roots in a Holmes story, and each elicits information about another Irregular which he'd prefer not be revealed. The police and the Sherlockians thus have their hands full trying to unravel codes and ciphers, interpret the meaning of the adventures, and discover the whereabouts of Worth's body and the means by which it was removed from the house. There's a cover blurb from the New York Times Book Review on the paperback edition I have which reads, “Delightful...offers a surprise on nearly every page.”

This brings me to the only complaint I have about the book—the edition. Mine was published by Carroll & Graf. I'm not sure about the number of pages containing surprises, but this particular book must have been proofread by someone whose idea of intellectual activity is dwarf-tossing. Even by C&G standards, which generally seem to be abysmal in the typographical error department, this one qualifies for the Guinness Book of World Records. By all means read the book. Just avoid the Carroll & Graf edition if you have options.

Among other works, Derringer Award-winner Barry Ergang's own impossible crime novelette, "The Play of Light and Shadow," is available at Amazon and Smashwords. Barry is selling books from his extensive personal collection at http://www.barryergangbooksforsale.yolasite.com/
Posted by Kevin R. Tipple at 12:30 AM

Email ThisBlogThis!Share to TwitterShare to FacebookShare to Pinterest
Labels: Anthony Boucher, At The Scene Of The Crime, barry ergang, Book Reviews, crime, mystery, Patrick Ohl, THE CASE OF THE BAKER STREET IRREGULARS, the golden age

Thanks for the reviews, Patrick, Barry and Kevin! I'm collecting links for Patti Abbott today, who is off taking a fun break this weekend.
http://tinyurl.com/o833k7n

I'm sorry. I forgot. My apologies. Thank you for collecting them.