Cueball Boland, owner of NiteWise Security Company as well as a couple of other things in Galveston, Texas has a very unpleasant task when he knocks on Micah Lanscomb’s trailer.  Cueball needs Micah’s help because a fellow guard, Jack Pense, is dead. Jack was on the job in the Demour warehouse when somebody hit him on the head, tied him up, and then beat him to death.  Cueball wants Micah to go have a look at the crime scene before they have to call the cops. 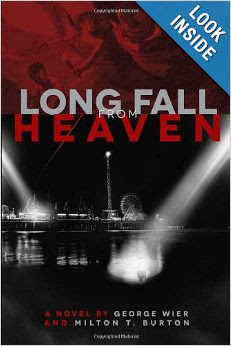 Jack Pense died in a warehouse owned by the legendary Demour family. They are old island money with plenty of power and connections and a desire to keep things quiet. Having a night watchman killed in their warehouse is not going to sit well with them or those that do their bidding. It also doesn’t sit well with either Micah or Cueball, both of whom have extensive law enforcement backgrounds and distaste for local law enforcement.

That means they intend to make it their case and will work it as they see fit. Wrongs have to be set right, as best as they can, in a case that will has links to crimes decades old that still reverberate with modern consequences. The truth may not set them free, but there can still be justice, not just for Jack Pense, all these many years later.

Featuring twin Texas story lines with one set in the late 1980’s and the other in the mid to late war years of World War II, Long Fall from Heaven is a powerful novel co-written by George Wier and the late Milton T. Burton. Rich in Texas history and details, the book is a complex multilayered read that is not easily summed up in any review without revealing a vast number of spoiler details. Suffice it to say that Long Fall from Heaven is incredibly good and very highly recommended.

Reviewer note---As I said last August when I reviewed These Mortal Remains here I knew Milton Burton and was honored to have been his friend. Before he passed away far too soon, Milton would call me on a regular basis a couple of times a month from his home in Tyler, Texas. His gravelly voice would boom across the miles as he inquired as to my family and my fiction writing. Writing, history, and many other topics deeply interested Milton who never stopped teaching. I deeply miss those talks and the man I never got to sit with in person. I have a feeling that somewhere Milton is still cackling with derision at the politicians and writing yet more great stories.

Review copy was provided by George Wier for my use in an objective review.