Sample Sunday: "FEEDWAY" from "PUN-ishing Tales: The Stuff That Groans Are Made On" by Barry Ergang

For a number of Sundays now, I have inflicted upon you samples from my own books. As I said last week, enough is enough of that. It isn't like I have 12 books out and can rotate a ton of samples at you. So, I am opening up things starting this Sunday with other stuff. 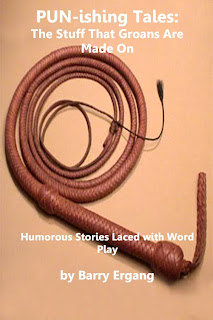 “What’re you thinking?” the resort owner demanded. “I ask for a first-class chef and you hire a race-car driver.”

“Retired race-car driver,” his president of operations said, “who’s studied at some of the world’s finest culinary institutes.”

The owner snorted. “Yeah— he’ll give the customers gas, right?”

“The customers’ll be revved. Racing’s popular all over the world. Drivers are superstars— including our boy. The novelty’s a great shift for us because we can
advertise a five-star restaurant featuring a dual-celebrity chef.” He snapped his fingers. “We could rename the restaurant Grand Prix!”

“Which of you do I spin out of here first?”

“Neither. At least, not till you’ve lapped the fare. You don’t know heaven till you’ve tasted his Lamb Borghini.”
Barry Ergang © 2013


PUN-ishing Tales: The Stuff That Groans Are Made On is one of a number of Barry Ergang's e-books available at Amazon and Smashwords.

I've gotta check this out. I LOVE puns!

So glad Barry put this collection together. I just grabbed a copy and can't wait to read it. Good luck, Barry!

I hope you enjoy it, Alice.

Thanks, Jan. Have fun with it.