Review: "Hell Up In Houston: A Jack Laramie Beat" by Garnett Elliott

Private Detective, Jack Laramie, is back in another gritty fast moving tale that is also very good. First seen in The Drifter Detective Jack makes his money by drifting from city to city across Texas doing work as a private detective while living out of the horse trailer he tows with his Desoto. Having wrapped up the current case after discovering the real truth of the matter the grandson of legendary US Marshal Cash Laramie is headed to Galveston to deal with a client as Hell Up in Houston opens. That mission is temporarily stopped thanks to mechanical problems with the old Desoto requiring him to stay for at least a few nights at “The Fulton” in Houston. 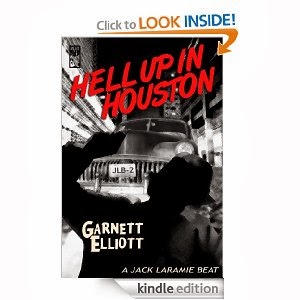 Jack had no desire to be back in Houston as the last time he was in Houston things did not go well. He also didn’t want to stay at “The Fulton” either. However, it is clear the Desoto is going to be at the garage awhile, the horse trailer is miles back on the side of the road awaiting its own tow truck pickup, and he really has no choice. “The Fulton” has a bit of a less than stellar reputation as well, but Jack doesn't care as the place has air conditioning. In 1946 Houston, Texas as now air conditioning is all that truly matters.

He also soon learns the place also has a house detective by the name of Frank Grogan. Frank wants him to do some work for him and will pay him a decent amount of money for a few days of work. Considering the repair bill for the Desoto, Jack doesn't really have a choice. Besides, Frank said the work should be easy. If Jack keeps his head down and goes about his business quietly with no one wiser that he is in town everything should be easy.

This latest installment in the series is another good one. Reminiscent of the hard boiled pulp of yesteryear, Jack Laramie is a man's man who gets his hands and boots dirty which fighting the good fight. As in the preceding book, the read here has plenty of action, deceitful characters, and a twisting storyline to keep readers very entertained. You certainly don't have to read the very good The Drifter Detective before reading Hell Up in Houston but, I recommend doing so. You won’t regret it.

Material supplied by David Cranmer in exchange for my objective review.

If you have not read my review of The Drifter Detective you can read it here.

Thanks for the thoughtful review, Kevin. I appreciate you taking a look at the Drifter series.

Enjoyed both of them very much. My reviews don't do the books justice.