Patrick Ohl is back this week for Friday Forgotten Books hosted by Patti Abbott. If things are still running as scheduled, this week Evan Lewis will be doing the links later today on his Davey Crockett’s Almanack of Mystery, Adventure, and The Wild West. A blog you should already be reading and enjoying so if you don’t know about it, get with the program. Today Patrick reviews The Zebra-Striped Hearse by Ross Macdonald. 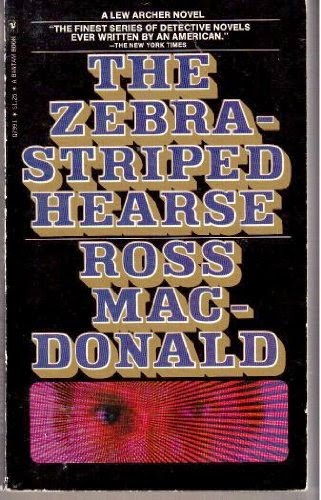 Raymond Chandler is known for creating mean streets on which his detective, Phillip Marlowe, would walk. Ross Macdonald, however, took the hardboiled genre in a new direction by creating Lew Archer, a private detective who was sensitive. The Zebra-Striped Hearse was published in 1962, three years after 1959’s The Galton Case, which was the first book by Ross Macdonald that I read.

Macdonald’s The Zebra-Striped Hearse is an intricately plotted book that keeps twisting and turning long after you think it’s finished. The story revolves around Colonel Blackwell, who consults Lew Archer about his daughter, Harriet. A month ago, she met a man named Burke Damis in Mexico, and now she wants to marry him. But the Colonel, overly protective of his daughter, senses that the young man is as phony as a three-dollar bill, and he hires Archer to look into Damis’ past life in order to uncover just what he is up to and expose him to Harriet.

The resulting plot is a complex one, and Macdonald uses it to tell a powerful story. These aren’t the mean, gangster-infested streets of Raymond Chandler. Rather, Macdonald takes crime and puts it into the neighbourhood, where even that nice old lady who lived down the street might have some connection with the murder in the newspaper headlines. In a way, the story is similar to that of The Galton Case; both novels evoke the loss of a child and the loss of a parent, both of which Ross Macdonald experienced. In both, Lew Archer sometimes seems more like a family therapist than a traditional private eye. Some use this to criticise Macdonald, saying that he wrote the same book over and over again. I can see the point, but from what I’ve seen, Macdonald uses a somewhat similar formula but produces something brilliant both times. The result is highly readable, literate, and there’s a note of genuine passion underscoring the book. That kind of combination is just outstanding.

Incidentally, I was expecting the titular “zebra-striped hearse” to be some crazy metaphor about life and death and stuff, because that’s kind of what I got to expect from the hardboiled, with titles like The Big Sleep or The Long Goodbye… but it’s an actual hearse, and it has actual zebra stripes. It pops up every once in a while as Lew Archer investigates. This alone makes the book worth a read.

Lew Archer is a decent sort in a tragic world, trying to help the victims of violent crime while bringing the guilty party to justice. In The Zebra-Striped Hearse, Macondald’s mystery is fairly clued, with complexity that could match wits with a Golden Ag author any day. But most intriguing of all is the way Macdonald uses the mystery to create a small piece of art that wouldn’t disgrace the pages of a “serious” literary author. The theme of loss and the family struggling to stay together have poignant notes to it that I like very much. I can’t think of something the book does wrong… and that’s always a good sign. Ross Macdonald apparently considered it one of his best books, and it was nominated for “Best Novel” at the 1963 Edgar Awards. It was beaten by Ellis Peters’ Death and the Joyful Woman, which I have yet to read…

To read The Zebra-Striped Hearse, I relied largely on an audio recording I’ve taken a great fancy to. It is complete and unabridged, but read by a full cast, with Harris Yulin as Lew Archer. The musical scores are well-placed, and the sound effects (like someone knocking at the door or the ocean being heard in the distance) really enhanced the reading experience for me. If you get a chance to listen to this recording, I highly recommend it.


Patrick Ohl ©2014
Make sure to read more of Patrick’s excellent work here on the blog as well as his website At The Scene Of The Crime.
Posted by Kevin R. Tipple at 12:30 AM

A wonderful review, Patrick. Thanks for reminding me why I liked this so much when I first read it years ago. And since I remember so little, I plan on re-reading several of the Lew Archer books once again. This one, of course, will be among them.

Patrick always does a good job. I don't think I have read this one.

Thank you for coming by and commenting.

I have read only a couple of books by Macdonald. This seems like something that I'd like.

Patrick is back tomorrow with another strong review.