Patrick Ohl is back this week for Friday Forgotten Books hosted by Patti Abbott. This week he is reviewing The Merry Hippo by Elspeth Huxley.

One of my very favourite movies of all-time is The Princess Bride, which is a very funny film with a little something for everyone: romance, action, satire… you name it! It is based on a book by William Goldman, which pretends it is an abridged version of a novel by S. Morgenstern, originally a satire of the excesses of European royalty. Both Morgenstern and the original book are entirely fictitious, but the details of Goldman’s “good parts” version are fun to read about.

The more I read the 1963 novel The Merry Hippo, the more I felt like it could use a “good parts” version itself. Written by Elspeth Huxley, it details the adventures of the Connor Commission, whose mission is to set down its recommendations for the rules that the Protectorate of Hapana, a British colony in Africa, should follow, as they seek independance. (A seemingly simple matter, but in actuality quite complex.) They are a delightfully mismatched bunch, and their arguments are plenty of fun to read. But of course, murder soon intervenes… 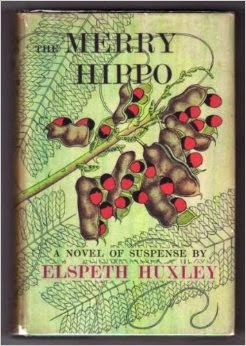 The Merry Hippo is written in a way that really is amusing. It’s light-hearted, the descriptions are vivid, and the characters are generally speaking likeable. The politics involved could have been handled in a dark and disturbing manner, but it is highly amusing to hear about the natives’ firm stance against the planting of tapioca. (It’s a bit of a long story…) The titular hippo, by the way, is not the hippo that intervenes in Terry Gilliam’s animation for Monty Python’s “Storytime”, nor is it the title of an obscure Disney movie. “The Merry Hippo” is the name of a guest-house where most of the events occur.

I was having so much fun, in fact, that the murder seemed like something of an anti-climax. And from then on, slowly but surely, the fun is pummelled out of the book. Some scenes briefly recapture the fun aspect—one particular example is a scene where a police officer questions a cook in an unconventional way. But as time wears on, more time is devoted to the mystery and less time is devoted to the genuinely amusing Hapanan politics.

I probably wouldn’t mind so much if there was anything of interest, but this is a remarkably dull mystery. There’s almost nothing of interest here: it’s a very generic plot of an apparently mistaken poisoning, a plot idea I was never really fond of. More stuff occurs, but there’s nothing really interesting here— not even a Communist plot to strike a fatal blow at the English economy with Polish pigs captured my imagination. And I’m a big fan of James Bond. The solution is unsatisfying, because based on the evidence you’re given, you’re never satisfied that X (and only X) could have been the killer. The solution is also rather unfair, though I admit there is a very good clue buried in the tedious material.

Still, it’s hardly enough, and as time wore on, I found myself liking the book less and less, stealing more than just the occasional glance at my bookshelf, wishing I could just get started on my next read. When the solution was finally revealed, I sighed. I had ten more pages to go, and it seemed like it would take me an eternity...

And then, in a brilliantly fun scene, I was suddenly reminded just why I started off liking the book in the first place, as a suggestion is made that statues be erected to commemorate the murder victim(s). This results in a series of misunderstandings involving Hapanan pigs, Moses, and scholarships. It made trecking through the dullness practically worth it.

The book should have ended there, to end the proceedings on a spirited, high note. But Huxley keeps on going, and explains some more things about the crime. There is such an incredible lapse of logic in this scene, I was surprised it even existed. This suddenly put The Princess Bride in my mind—I can’t help but feel the book would have been so much better if a “good parts” version has been released instead. The mystery is remarkably dull and the comic scenes that make the book worthwhile are few and far between by the 150-page mark.

To put it briefly: outrage over the planting of tapioca is a more interesting topic than the murder and ensuing investigation. That’s a sign of trouble.