Review: "The Boy Who Killed Demons" by Dave Zeltserman

It is hard being a teenager. Even worse when you see a neighbor down the way mowing his lawn and the guy appears to you as a demon. Henry Dudlow was thirteen when his special talent became evident. A talent that he considers a curse and it is easy to see why. He sees demons. Not figuratively, but literally in the flesh and blood. Or at least in whatever they have body wise. Some of those who walk among us and appear to be human are actually demons in flaming red skin, yellow eyes, jaws full of glistening teeth, talons for hands, and more. They are among us and Henry Dudlow can see them. 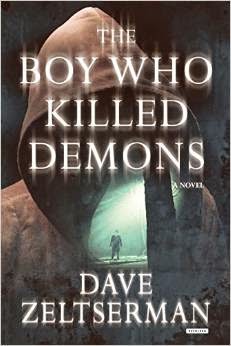 It isn't like he can talk to anyone about what he sees as his parents, his teachers, and anyone else he told would think he was nuts. What he can do, because he is very smart, is to learn all he can about them so that he can eliminate them. One of the many problems he faces is the fact that the demons could figure out who he is before he is ready and do very bad things to him, his parents, and anyone he cares about. Hiding the fact that he can see them is one of the many challenges he faces.

Billed as a young adult novel, The Boy Who Killed Demons instead reads very much like an adult novel. Written in a journal style as the days and months pass, the book is Henry’s recounting of events and explanations for why he did what he did when he did it. Henry is smart, gifted even in some aspects, and experiences things at a level far above his age. The fight against the demons allows for nothing else and it is a battle that for the most part he experiences alone and shares with no one outside his journal. Those familiar with author Dave Zeltserman's numerous crime novels will detect a noir feel that runs the gamut of the book.

That being said this is a good book that features an interesting story line and a character that evolves over the length of the read. He frequently pushes boundaries in the course of learning how to go about dealing with, not only his ability to see demons, but the consequences of that talent and other actions. As result he does some very adult things that may not be legal and yet, with the fate of the world at stake, who is to judge?  Language is, at times, graphic though the occasions are few.

As far as the horror angle goes, it was not horrific at all. There are some moments of violence and references to ancient evil and what demons can do and are trying to do now, but it isn’t a horror novel. Much like his very good The Caretaker of Lorne Field that was much more mystery than horror, that is the case here with a novel that is much more science fiction or fantasy like than horror. Not matter how your personally would classify it The Boy Who Killed Demons is a good read.

E-book review copy supplied by the author in exchange for my objective review.

A new one by a favorite author of mine! So glad to learn about this, Kevin. It sounds like a terrific blend of genres, and you're right--not "just" for the YA sect. Will be looking for it...

Adult, not YA, but a good one.