Barry Ergang gets things started here on this first Friday in December with a new review. After you read his review,  head on over to Patti Abbott’s blog for other reading suggestions.

The ninth in a series of 24 novels starring and narrated by ex-cop-turned-Los Angeles- private-detective Toby Peters, as quintessentially down-and-out as any fictional P.I. I can think of, this one finds Toby hired by none other than First Lady Eleanor Roosevelt to find her husband Franklin’s Scottish Terrier Fala. Mrs. Roosevelt is certain the dog has been kidnapped by a former District of Columbia veterinarian named Roy Olson, and wants Peters to recover him before President Roosevelt discovers he’s missing. 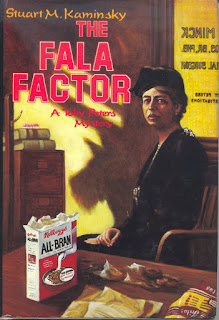 A case which involves a couple of murders and the president’s pooch has some contemporary political analogs when Toby encounters some ultra-right-wingers with governmental ideas of their own. He also has to deal with one Academy Dolmitz, a bookie fond of film trivia who fronts as a bookstore proprietor and who might have knowledge of Martin Lyle, who in turn is aided by Elmo Bass, a former pro-wrestler and current bonebreaker-on-payroll.

Then there are the women: Jane Poslik, who used to work for Olson, and Anne Olson, who is not necessarily what she seems but who takes a somewhat carnal interest in Toby.

As often happens in a hardboiled but wry-toned Toby Peters case, our hero must contend with his landlady, Mrs. Plaut, who thinks his name is—and refers to him as—Mr. Peelers; the incompetent and  less-than-hygienic dentist Sheldon Minck, from whom he rents office space; the antagonistic Sergeant John Cawelti, from the Wilshire District police station; recently promoted-to-captain-of-the-aforementioned-district Phil Pevsner, Toby’s oft-abusive brother; and Detective Steve Seidman, with whom he gets along fairly well—though whether he will after Shelly Minck gets through with Seidman remains to be seen.

Toby also has his allies: Jeremy Butler, former pro-wrestler, landlord of the Farraday Building and aspiring poet; and Gunther Werthman, a fellow resident of Mrs. Plaut’s boarding house. Jeremy is of particular value in this adventure since he and Elmo Bass have tangled in the past. And, because those Toby Peters novels I’ve previously read have all included more than one “guest star,” I must mention that this one involves an entertaining sequence with the great deadpan comic, Buster Keaton.

Readers who are fond of fast-paced detective stories that meld mystery with action and humor are likely to enjoy Toby Peters and his Hollywood adventures.

Examples of Derringer Award-winner Barry Ergang’s work can be found at Smashwords and Amazon. His website is http://www.writetrack.yolasite.com/
Posted by Kevin R. Tipple at 12:30 AM


Barry, I haven't read anything by Stuart Kaminsky for a number of years. I liked everything he wrote, but his Toby Peters stories were my favorites. Kaminsky was a master at mixing charismatic characters with crime and comedy. You made this one sound so interesting I might have to give it a try.

Not familiar with Kaminsky, but now I'm interested. Besides, I've always had a thing for Eleanor Roosevelt.

Barry and Kevin, I LOVE Stuart Kaminsky's Toby Peters books. Always have. Always will. My favorite must be MILDRED PIERCED (LOVE that title) but THE FALA FACTOR is up there in lovability as well. I also love the Mae West book and the Salvadore Dali book and the Charlie Chaplin book. Lots to love about Kaminsky.

Mrs. Plaut. What can I say? When I'm asked what character in fiction I am most like, I always answer Mrs. Plaut. HA!!

Thanks to everyone for taking the time to comment.

I've read a fair number of Toby Peters novels over the years, the first being Murder On the Yellow Brick Road because Raymond Chandler is one of the celebrity stars. Until I saw the list of titles at The Thrilling Detective Web Site's Toby Peters page (http://www.thrillingdetective.com/toby_peters.html), I had no idea Kaminsky had written 24 of them.