Guest Post: Lois Winston and Where She Gets Some Of Her Ideas

Please welcome author Lois Winston to the blog as she discusses where she gets some of her ideas….

My husband and I live in one of the “bridge and tunnel” community of New Jersey, so named because many of the state’s residents, my husband included, either commute into Manhattan via the George Washington Bridge or through one of several train and car tunnels under the Hudson River. Because 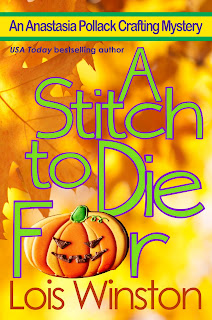 we’re so close to the city, real estate prices are much higher here than in many other parts of the country. For this reason, when my husband came across a recent real estate listing for a home several blocks from us, it piqued our curiosity.

Great opportunity to own in (name of our town) for way under market. Interior condition is unknown. Interior and exterior inspections are not available, and the property is being sold as-is. Property is occupied. Inspections not available. Contact with occupants is prohibited. Buyer is responsible for all inspections & municipal certificates, including certificate of occupancy.

Why would anyone sell a house for half its value? We walked over to take a look. From the outside the home appeared well maintained. No peeling paint. No deteriorating roof. No piles of trash in the yard. The lawn was neatly trimmed, the leaves raked, the shrubs pruned.

The mystery writer in me immediately began churning possible scenarios. Was this listing the result of a nasty divorce? An estate sale with feuding siblings? A rental property occupied by squatters the owner couldn’t evict? Did the house sit over a massive termite colony? Had it been used to cook meth? Was it the scene of a murder? No matter what the problem, it seemed evident the owner was attempting to unload a massive problem onto some unsuspecting bargain hunter. If he succeeded, would the new owner retaliate in some way once he had keys in hand and realized the scope of the problem?

No matter what the situation, as a writer I’d hit the mother lode. The plot possibilities continued to bombard me as we walk home. My husband even came up with a few ideas I hadn’t considered.

Authors are often asked where we get the ideas for our stories and characters. My ideas often come from my own personal experiences or events I’ve either witnessed, read about, or seen on the news. Sometimes a combination of all all of these. Yet, even though one of the maxims of fiction is to write what you know, I never realized how much my own life impacted my stories until I took a look at my catalogue of work.

I’ve published more than two dozen novels, novellas, and short stories in the past ten years. Looking at each one, whether mystery, romance, romantic suspense, or even my middle grade children’s book, I find elements of my own life’s experiences, newsworthy events, and people who have impacted me in one way or another. Some of this was deliberate. Other times it was subliminal and only afterwards did I make the connection between the story and my own life. 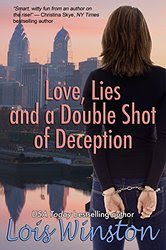 These influences run the gamut from minor references in scenes to major characters and plots. For instance, in the late 90’s a Main Line Philadelphia latex glove salesman convicted of strangling his lawyer wife turned out to be leading a double life. Love, Lies and a Double Shot of Deception, my award-winning romantic suspense and my second published book, is not even remotely based on this case, but the case inspired the book in several ways, including the double life of my protagonist’s husband, the Philadelphia setting, and one of the minor characters.

A few years after writing Love, Lies and a Double Shot of Deception, I accompanied a recently divorced friend to our local bookstore. This was several years before online dating sites changed the world of dating. My friend was feeling vulnerable and unsure how to go about getting back into the dating pool. She was also a stockbroker and used to doing in-depth research. So she purchased an armload of how-to-catch-a-man advice books, including the infamous The Rules, and set about learning how to snag her next husband. Thanks to her, I came away from that bookstore trip with the idea for my award-winning romantic comedy Hooking Mr. Right.

My humorous amateur sleuth Anastasia Pollack Crafting Mystery series is probably influenced the most by my own experiences. Anastasia is forced to share her home with her communist mother-in-law. For six long years I shared a home with my own communist mother-in-law. We got along as well as Anastasia and Lucille get along—which is to say, not at all. I’m still not sure whether creating Lucille was catharsis or revenge on my part or simply a case of turning lemons into lemonade, but Lucille has become the character readers love to hate. Although some readers implore me to kill her off, most would boycott my books if I ever did. So the curmudgeonly Lucille is here to stay.

I’ve also given Anastasia a profession I know intimately. Anastasia is a crafts editor at a women’s magazine. For many years I worked as a craft designer and editor for magazines, book publishers, and kit manufacturers. Although I’ve often had to research various aspects of my plots, I’m able to draw from my own years of experience for Anastasia’s job.

But the influences don’t stop with characters and professions. Revenge of the Crafty Corpse finds Anastasia moonlighting as an arts and crafts teacher at a senior living residence. I based the setting on a place where some family members lived.

Several years ago my husband and I took a trip to Barcelona. I fell in love with Parc Güell and decided it would make a perfect setting for one of Anastasia’s adventures, which became Mosaic Mayhem.

I’ve also drawn from my experiences raising teenage sons. However, Anastasia and I differ in one extremely huge way: my husband is still very much alive and definitely not a gambling addict. At least I don’t think he is. Come to think of it, Anastasia didn’t have a clue about Karl’s duplicity until he dropped dead in Las Vegas. Hmm…maybe I’d better do a bit of investigating myself…

There are currently five full-length novels in the Anastasia Pollack Crafting Mystery series, which 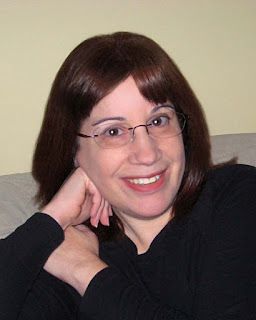 include Assault with a Deadly Glue Gun, Death by Killer Mop Doll, Revenge of the Crafty Corpse, Decoupage Can Be Deadly, and the recently released A Stitch to Die For, as well as three mini-mysteries: Crewel Intentions, Mosaic Mayhem, and Patchwork Peril.

USA Today bestselling and award-winning author Lois Winston writes mystery, romance, romantic suspense, chick lit, women’s fiction, children’s chapter books, and nonfiction under her own name and her Emma Carlyle pen name. Kirkus Reviews dubbed her critically acclaimed Anastasia Pollack Crafting Mystery series, “North Jersey’s more mature answer to Stephanie Plum.” In addition, Lois is an award-winning craft and needlework designer who often draws much of her source material for both her characters and plots from her experiences in the crafts industry. Visit Lois/Emma at www.loiswinston.com and Anastasia at the Killer Crafts & Crafty Killers blog, www.anastasiapollack.blogspot.com. Follow everyone on Tsu at www.tsu.co/loiswinston, on Pinterest at www.pinterest.com/anasleuth, and onTwitter at https://twitter.com/Anasleuth. Sign up for her newsletter at https://www.MyAuthorBiz.com/ENewsletter.php?acct=LW2467152513

I love all the places we get ideas for stories. :) All the best!

Ideas are all around us. We only have to look. Thanks for stopping by, Melissa!

This ad reminds me of the HGTV show "Flip or Flop." The flipping couple often buy houses they can't get into ahead of time, some still occupied by renters. And yes, some of the dire scenarios you imagined are true--the place has been trashed or badly neglected, so that it needs a ton of work. But for the purposes of a mystery, I do like the idea of a notorious murder having taken place there. Maybe leaving behind a ghost, as well? ;-)

Hi Lois,
I read two newspapers a day and get my ideas from asking, "What if..." to stories. Thanks for your inspirations.
Richard Brawer
www.richardbrawer.com


It's amazing, Lois, how many story ideas are floating all around us. All we have to do is open our imagination and grab one. You've obviously mastered the art of doing that. Best wishes for continued success with your writing.

I love this post, Lois! Most of my ideas come from research (but what if...) or TV and movies (but why didn't they...) and the news (how could they!) And if you haven't seen strange issues with your finances, I'd say by this point you're probably pretty safe :)

There's so much out there that gets me speculating that my problem is not finding something to write about, it's choosing which idea I'm going to focus on long enough to get a novel out of it. Sigh.

Thanks again for doing this, Lois. Appreciate it very much.