As linked to here yesterday,  The Lawyer: Six Guns at Sundown by  Eric Beetner is the latest one in this awesome Western series. For today only it is also available for free. Amazon synopsis: 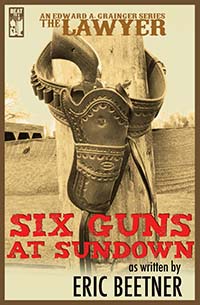 "Seething hatred spurs The Lawyer forward, with a burning vengeance for his family slaughtered by seven hardened gunslingers. He’s tracking them down, one by one, until every killer is in the ground. His next target, Big Jim Kimbrough, left tracks to the small town of Sundown, Arkansas, where The Lawyer learns his prey has already moved on.

But he can’t leave after he witnesses a black man named Josiah being dragged behind a horse, the man’s only crime is allegedly taking food from a white man’s table, and is about to be lynched. The Lawyer takes up arms to save Josiah, realizing Kimbrough is slipping from his grasp with every minute he spends in Sundown. None of that will matter, though, if The Lawyer doesn’t survive the next twelve hours in the wake of a racially charged mob, fueled by the town’s tyrant and cheap liquor.

Eric Beetner (The Year I Died Seven Times) is no stranger to writing terse, action-packed storylines. He shifts his gifted prose from modern crime tales to the gritty world of the Old West without missing a beat. SIX GUNS AT SUNDOWN is a riveting Western that continually tightens its grip to the last provocative page."

While you are at it, pick up the western novellas The Lawyer: Stay of Execution and  The Lawyer: The Retributioners.