Barry is back this week with a review for Friday’s Forgotten Books. Make sure you check out the list at Patti’s blog. May your Friday be a good one that is fiend free.

Charlie Gowen knows he shouldn’t be sitting in his car across the street from the school playground. He was ordered a long time ago against hanging around anywhere children congregate. “The conditions were impossible, of course. He couldn’t turn and run in the opposite direction every time he saw a child. They 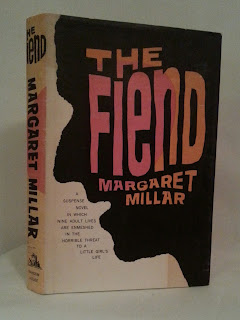 were all over, everywhere, at any hour.” When he sees nine-year-old Jessie Brant fall from the jungle gym, he is determined to warn her parents—even lecture them, if necessary—about caring for someone he believes to be a fragile little girl. But he needs to know where she lives, so in his green coupé he follows her and her girlfriend, Mary Martha Oakley, home.

So begins The Fiend, an outstanding novel of psychological suspense by one of the most skillful writers ever to work in this genre. But to say much more about the storyline would conceivably spoil the hard-to-stop-reading experience, so I’ll refrain beyond citing generalities.

The most prominent characters include Kate Oakley, mother of the aforementioned Mary Martha, who verges on paranoia when it comes to her ex-husband Sheridan. Kate is convinced it is he who is watching the house from a green coupé, and who is doing anything and everything he can to torment her. Kate frequently calls her attorney, Ralph MacPherson, whenever she fears—however abstractly— that she’s being assailed by Sheridan.

The Brants, Ellen and David, Jessie’s parents, appear to be the almost stereotypical happily-married suburban couple. The operative word is appear. Their next-door neighbors are Howard and Virginia Arlington. They are childless, so Virginia dotes on Jessie like an adoring relative (or mother wannabe), often spoiling her by giving her gifts that Ellen feels are inappropriately expensive. When Jessie is ordered to return a twenty-dollar book to Virginia, Howard—whose marriage is more than a little rocky—presses twenty dollars in cash on the little girl, thus catalyzing a crucial future event.

Ben Gowen is Charlie’s older brother and, of necessity since their parents are dead, his caretaker, despite Charlie’s having a job he handles responsibly. Still living in the house he and Charlie grew up in, Ben is more than a little pleased when Charlie meets Louise Lang and sees the two of them develop a relationship that is leading to marriage, because then he’ll be able to find an apartment of his own to live in and finally cultivate a life apart from Charlie’s.

In the hands of a lesser writer, The Fiend would most likely become sensationalistic tripe. Ms. Millar takes mundane events and transforms them into a tense, page-turning experience. Readers who enjoy novels featuring characters adroitly delineated via their back stories, internal monologues and dialogues so that they virtually get up and walk off the page, are likely to savor this brilliantly-constructed novel.

Thanks, Mathew. And yes, she was a stunning mistress of the kind of subtle understatement and strong characterizations that keeps readers glued to her books.