The anthology Top Suspense: Favorite Kills features 12 very strong suspense tales. Assembled and published in 2011 by Top Suspense Group the short stories are ones that were previously published in various places. Due to their length as short stories one can’t go into too much detail without giving away spoilers, but much is at work in each one of them. They all are good ones and a couple are downright creepy bordering on the horrific. 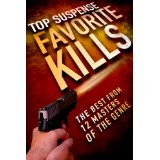 The award winning story, “Archie’s Been Framed” by Dave Zeltsman gets things going. Julius has plenty of money in the bank and can enjoy the finer things in life for a while. He has no reason to work until Archie is framed for the murder of  27 year old Denise Penny. If the nature of Archie’s existence were revealed that is not an option.  Julius does not have a choice – he has to investigate and clear Archie.

Bordering on the horrific in this reader’s opinion is the next story by Harry Shannon titled “Night Nurse” by Harry Shannon. Bud is in the hospital and suffering big time. The only one who seems to have any compassion is his ongoing medical drama is his night nurse.

Several of the Solomon and Lord series by Paul Levine are on my e-book tbr pile. In this anthology, Solomon and Lord appear in “Solomon and Lord Drop Anchor.” Steve Solomon plans to go out to sea on a boat with Manuel Cruz ostensibly to go fishing. The same Miguel Cruz they are about to sue after he embezzled three million from a local car dealership nearly making the elderly owner bankrupt. Victoria Lord knows her law partner isn’t telling her everything and she intends to attend the deep sea business meeting as well to protect her partner and their interests.

The Korean women that perform the massages at the spa in Korea Town seem to be uniform in appearance and anonymity. Ann’s masseuse goes by the name “Number 19” and is supposed to get a $20 tip. But, will she actually get that money and more is questioned in “Number 19” by Naomi Hirahara.

The two elderly women live in Davis, Florida when they can garden a bit, feed some cats, and once a month go to the beach for a swim. They also smoke pot a bit and fantasize about trip to Hawaii.  Then, a homeless guy by the name of Henry becomes part of their lives in “Sweet Dreams” by Vicki Hendricks and things evolve from the normal routine.

Larry and Marge Falls took the trip to Vegas in “House Rules” because Marge desperately wanted to do something new and different. But the trip is not going well and the side trip to Red Rock Canyon hasn’t helped. It’s time for change.

Doing the crime is one thing. Making sure the cover up stays intact is another. That is the premise behind “Angie” by Ed. Gorman. One seriously creepy story with lots at stake for all involved.

For Travis Runnels every single day is a knife fight. Being in jail is just an occupational hazard for him. It is a public defender like Alex Stone who Travis is going to have to rely on to get him out of a death penalty murder case. The fact that she is a Jew and lesbian doesn't impress him any more than the fact he is an African-American impresses her in “Knife Fight: An Alex Stone Short Story” by Joel Goldman.

If you remember or ever saw “Dragnet” starting Jack Webb you will get a kick out of this one titled “Jack Webb’s Star” by Lee Goldberg.  If you haven’t, go check out at least a couple of episodes first before you read this dark and funny twisted tale. You need the frame of reference.

Holly has had a rough night. At least the kids are okay. But, she really needs to get out of the emergency room in “Restraint” by Stephen Gallagher. She also needs to get her car from the bottom of the embankment before the cops start poking around it too much. This is another dark tale, but nothing funny is at work here.

Texas author Bill Crider is up next with his tale “Top Of The World.” Thanks to Sam Cobb he met Vicky. It might have been better for everyone if they had never crossed paths. She is dangerous and just might get him killed. Or kill him herself.

The final tale is “A Matter Of Principal: a Quarry Story” by Max Allan Collins. Quarry knows he recognizes the guy in the convenience store in the middle of the night. It has been ten years since they last ran into each other and though the guy does not recognize him, Quarry knows him and knows something is up. The only option is to tail him and get some answers and maybe just a little payback.

12 short stories bios of the author involved bring the read to a close.

Published in 2011 by Top Suspense Group, the 12 tales here are all good ones. These are not tales that feature happy people doing happy things. No, the suspense tales here at times push the edge into horror as the characters live difficult lives often on the edges of society. One does what one has to do to survive and that desperation is always at work in Top Suspense: Favorite Kills.

According to Amazon I picked this up on March 8, 2014. I have no idea now if I bought it by way of funds in my Amazon Associate account, because it was a free read on that date, or because it was given to me. I had forgotten I even had it until Barry Ergang, who was reading it awhile back, mentioned it to me and I hunted for it.

Yes, I read this one a couple of months ago, and it's definitely worth one's time.

Good stuff. Thank you for reminding me about it. Things tend to get lost in the kindle.